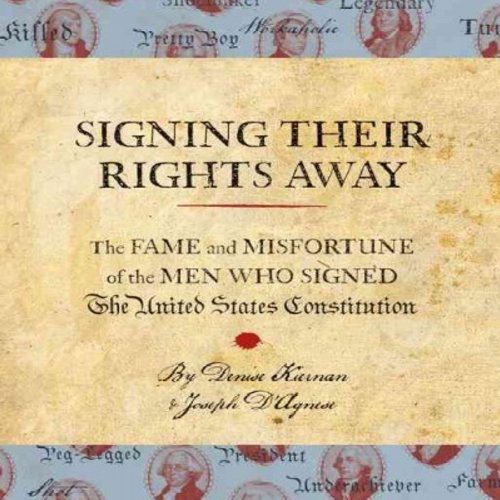 Signing Their Rights Away

By: Denise Kiernan,Joseph D'Agnese
Narrated by: Susan Larkin
Try for $0.00

With their book Signing Their Lives Away, Denise Kiernan and Joseph D’Agnese introduced listeners to the 56 statesmen (and occasional scoundrels!) who signed the Declaration of Independence. Now they’ve turned their attention to the 39 men who met in the summer of 1787 and put their names to the U.S. Constitution.

Signing Their Rights Away chronicles a moment in American history when our elected officials knew how to compromise - and put aside personal gain for the greater good of the nation. These men were just as quirky and flawed as the elected officials we have today: Hugh Williamson believed in aliens, Robert Morris went to prison, Jonathan Dayton stole $18,000 from Congress, and Thomas Mifflin was ruined by alcohol. Yet somehow these imperfect men managed to craft the world’s most perfect Constitution. With 39 mini-biographies Signing Their Rights Away offers an entertaining and enlightening narrative for history buffs of all ages.

What listeners say about Signing Their Rights Away

The title is a come on fraud. Very few were ruined because they signed. The rest is moderately informative but lacking in sophistication.