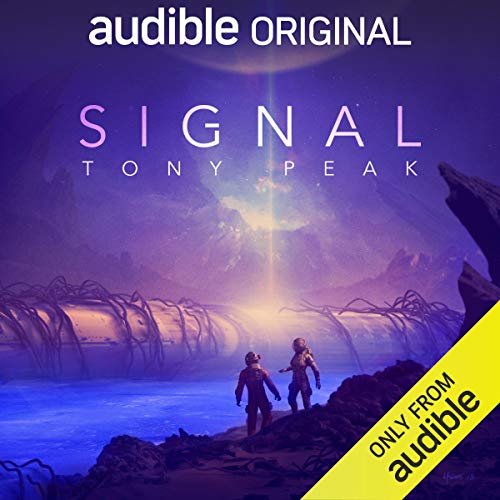 They were sent to investigate the first extraterrestrial signal. What they found was beyond anything they could have imagined - or feared.

On a voyage to a mysterious moon in the Alpha Centauri system, the UEA Centaurus meets with disaster. Only the quick thinking of the flight engineer, Rachel Terman, saves some of the crew. Crash-landing on the moon, trillions of kilometers from Earth, they struggle to carry out their mission and try to survive.

But nothing has prepared them for what they will face. False readings on sensors. Bizarre nightmares. Crew members vanishing.

If the signal abides - will humankind fall?

What listeners say about Signal

Tony Peak plunges you into his vision

Exciting, relevant, and probably the best sci-fi I've (read? heard?) consumed since the Southern Reach series. There are shades of "Contact" and touches of "The Expanse" dotting the broad strokes of Tony's unique techno-operatic storytelling style with smart, strong women characters, a mystery to be solved, and littered progressive nods to today's world that resonate.

Just use a single voice

The reader attempts to change her voice for every character. She does an awful job with the male characters. She does an even worse job with the fake accents. Just read the book to me. The story is good enough to stand on its own. The switching of voices is distracting. If you really feel the need to switch voices, then hire multiple voice actors.

A little hard to follow initially but the scary and strange events create an atmospheric story worth the listen!

Interesting concept marred by unlikeable and unrealistic characters. Implausibly, the behaviors of these vetted “highly trained” and “very intelligent” astronauts almost instantly devolve into childish tantrums and rash decision-making in dire circumstances involving a first contact scenario. Plus, the background storyline of institutionalized racism against the primary protagonist, a Martian, seems forced. Rather than becoming a sympathetic character who must travail against overwhelming prejudice, she’s the worst and the whiniest of the lot.

Compounding all this badness is a narrator whose quavery voice makes the female characters constantly sound weepy or histrionic and whose four foreign accents (ostensibly Pakistani, Russian, Norwegian, and some indeterminate North African country) are barely comprehensible and virtually indistinguishable from one another. Save your credit and skip this one.

Well...Where to start. I actually made it through this whole story even after wanting to return it 30 minutes in, a fact I'm not sure if I am proud of. I figured it simply HAD to get better. Nope. The summary seemed interesting. It was terrible on all fronts and never got better. I won't talk about the plot, which isn't original (if you've read Corey's The Expanse series or played the game Halo, you're pretty much there), but the plot holes, the narrator, and the characters were...I don't know the word for it. Bizarre? Cliche? Bizarrely terrible? Terribly bizarre? Just plain terrible? I would need a thesaurus and more time, maybe another language, but they were all terrible.

NARRATOR: She sounds like she's on the edge of breathless crying at all times, I understand the book is about hardship, so maybe it was acting to some degree, but it is exhausting to listen to. She sounds breathless, pleading, hopeless, and whiny. She sounds asthmatic, and it's a chore to listen to, and it goes on for hours. I assume this is how she normally talks. It's like listening to a speaker who speaks English as a second language, describe cleanup footage from an air raid that blew up an orphanage. Hours and hours of it.

PLOT HOLES: There are some big ones. Why would a super expensive mission, even rushed, not have a clear chain of command that is adhered to? Why would it have secret sub groups? Why would the leader decide to gallivant around with her new found lover (THAT sure develops quickly!) complaining about nobody listening and never actually be present to do her job? I won't ruin one of the bad guy characters, but their whole existence and actions are meaningless when they could have accomplished their mission in the first few pages of the book. Literally! The ending, supposed to be dramatic, had me say, "Why did she do all those other things and not just do this right at the beginning?"

CHARACTERS: The is where the "snowflakes" comment comes in. This book felt like it had a hard agenda to push. The main character is not only a woman (some of Sci-Fi's best characters are, so not really new ground), but she is also a lesbian (mockingly represented by the author), and is ALSO a Martian (human from Mars, Grok?) , so she represents a "minority" presence THREE SEPARATE WAYS for us to listen to her cry about rather than doing her job! Wonderful. I could care less about either of those distinctions. The sexuality of the character shouldn't make that much difference except the author almost makes a mockery of that. She instantly finds a super hot Scandinavian lesbian on board, they fall in love instantly, and they develop a super heated sexual relationship while stranded on a distant planet being hunted by killers of all varieties, which seemed a bit forced to me. She's having lots of sex, feeling persecuted for it, but not actually doing her job as a commander, and we are supposed to feel sorry for her. Everybody is focused on fixing the problem, she's constantly crying about feeling marginalized and trying to get laid at the same time. If you're really in tune with the whole crybaby movement, don't think schools should grade kids, and have coworkers that secretly/openly hate working with you and dealing with your lack of productivity, maybe you'll sympathize with the protagonist, but I found it beyond difficult to do. Sexuality actually plays a big part in this story too, which I found very forced. Seems like almost everybody is homosexual, and not in a Forever War sort of explained way like it's been found necessary for society, but they really need to talk about it while trying to figure out things like decaying orbits, falling supply reserves, and terrifying hunters trying to kill them. Maybe just clearing the air before death.

This should be a hard pass for anybody except those who, as Winston Smith says in 1984, feel that "The best books... are those that tell you what you know already.” There is no surprise here. Nothing creative to be found. There is nothing novel besides maybe the idea that Millennial stereotypes can accomplish great things through crying. There is certainly nothing worth listening to in the narrator's tone. The story is a chore on all levels.

The voices from the main narrator all do sound like a bad Russian accent. She still does pretty well though. The base / foundation of the story is ok. Once it gets into the details it losses me. Their actions, brake down of command, etc baffles me.

difficult listen due to foreign accents.

The story was fair, but was ruined by characters that are overly difficult to understand. in real life conversation you have visual cues that help overcome difficulty understanding someone with a heavy accent, or you can ask them to repeat themselves. You have neither of those in an audiobook and it was a mistake for this narrator to try to emulate foreigners as I was unable to understand a significant amount of the book. The characters all seem socially inept (who picked these for a crew going to a distant star?), None of them get along, well except for those in gay relationships. oh, and they curse throughout. I did not enjoy this book at all.

Too bad not fully dramatized only small parts here and there also too bad the narratief is very poor.

Didn't care for this one much at all. Poorly thought out and lacking in just about everything I look for in a story. Read my complete thoughts at Elitist Book Reviews.

I was surprised to find this was more a story about a homosexual set of astronauts than a science fiction novel. The voice acting was good. Story ok. I don't really recommend.

Signal is a Keeper

Not a fan of the radio play format. Story was quite slow and didn’t really offer anything new.