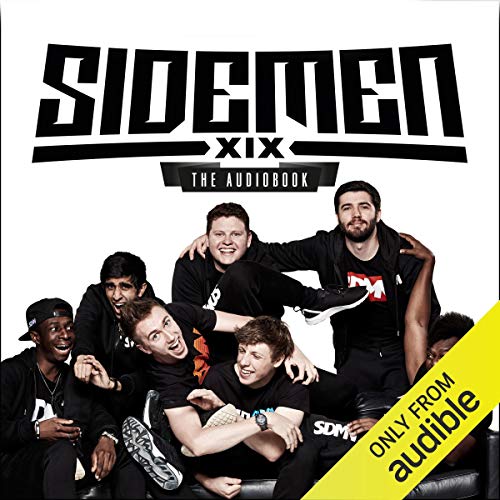 By: The Sidemen
Narrated by: JJ/KSI,Harry/Wroetoshaw,Simon/Miniminter,Vik/Vikkstar123,Josh/Zerkaa,Ethan/Behzinga,Tobi/Tobjizzle
Try for $0.00

Billions of you have watched their videos, and millions of you have followed them on social media. So here we go: it's time to back up, because YouTube superstars The Sidemen are finally here in audiobook form, and they're dishing the dirt on each other as well as the YouTube universe. The guys are behind the mic, and it's about to get messy. There's nowhere to hide as the guys go in hard on their living habits, their football ability, and their dodgy clobber while also talking FIFA, Vegas and superheroes.

Exclusively in the audiobook you'll hear behind-the-scenes commentary, extra material and a few surprises! You've seen them already –- now get ready to hear them in all their glory. They will let you in on a few secrets, before telling you about their hall of fame as well as revealing some of their greatest shames.

Along the way you'll learn how seven of the world's biggest YouTube stars started off with nothing more than computer consoles, PCs and bad haircuts before joining forces to crush the Internet. And they'll tell you just how they did it (because they're nice like that) with their ultimate guide to YouTube while also sharing their memories of recording their favourite videos as well as a typical day in the life of The Sidemen.You'll feel like you're with them every step of the way, smelling the 'sweet' aroma of the boys' favourite dishes in the kitchen, following them on their trips around the world and kicking every ball as the boys gear up for the biggest football match of their lives. It's going to get personal. It's going to get intense, and JJ is going to have lots of tantrums, so take a moment to prepare yourself, because this is The Sidemen audiobook you've been waiting for!

What listeners say about Sidemen: The Audiobook

Like a very funny extended sidemen podcast. Top class from the boys.

It's worth the purchase

Loved it as much as I love the guys. They made the book so much more enjoyable than if it were read by someone else and I loved the content. Very funny!

Definitely Worth the Listen

It's great to get to know a bit more about the Sidemen and how they interact with one another. Nothing gets too deep, but it is entertaining. Just like a 5 hour long video.

Loved the audiobook. It's not just a regular basic reading. It's the boys being themselves but still reading. I also love the bloopers

Entertaining from beginning to end. You get to know your favourite youtuber's even better. 100% Worth it!

Very interesting and hilarious way to kill time. Definitely answered some questions I had (and some that I didn't). I would absolutely recommend it

This was one of the best books I have ever read. Great book guys! (Simon u are my favourite sidemen, Sorry Tobi!)

hilarious. amazing and hilarious. learned new things about the sidemen, and in a funny way. absolutely loved it

Good Book, almost like a looooong podcast from the Sidemen! Recommend this book to everyone!

Love the sidemen so much, so happy i listened for the whole 5 hours❤️ such an amazing book xxxx

the best book ever

it was extremely extremely realy funny. best when you listen to it with the book.

Would you consider the audio edition of Sidemen: The Audiobook to be better than the print version?

I think it is better than the print edition

What was one of the most memorable moments of Sidemen: The Audiobook?

It was a really good book. Going to support the Sidemen Channel On Youtube. Keep it up sidemen #myfavouriteyoutubers

I love the sidemen!! so funny when Ethan laughs. Recommend for 10 and over. Keep doing what you are doing!!

Absolutely loved it. Amazing how far you lot have came and im proud that i have been following the whole time

The best book of all time

This book is entertaining from beginning to end, there are no dull moments. I recommend this book to any fans of the sidemen. 100% worth the money! There is nothing negative to say!

honestly so proud of these boys, I bought the book but I still listened to the audio book because it's just as good. thank you for putting so much effort into this, you deserve all the love x

great nice knowing about there life style and

couldn't. stopped listening to this audio book. don't judge me if I spelled audio wrong. pleas

I loved the fact that the boys just got to be themselves and have fun while recording! Such an amazing accomplishment for the sidemen with many more to come:) sending love from New Zealand❤️

Loved listening to this book. 10/10 would recommend to anyone who is a Sidemen fan, as well as anyone who isn't. You'll probably get a good laugh out of it.

This audiobook doesn't sound like a group of guys just reading a book. It's interesting and highly engaging. Enjoyed it a lot!

Loved it, unfortunately has to end but that's life, good job guys, good job with the show as well.

Would you consider the audio edition of Sidemen: The Audiobook to be better than the print version?

I own both and personally i had both open when going through them they where fantastic.

What was one of the most memorable moments of Sidemen: The Audiobook?

Back and forth chat

the first 5 hours was great

Very very funny. Loved it 🖒 Wish it was longer. popped this on the radio and made everyone listen to it.

I loved this. Absolutely hilarious. Congratulations, Sidemen, on your success. Look forward watching your videos.