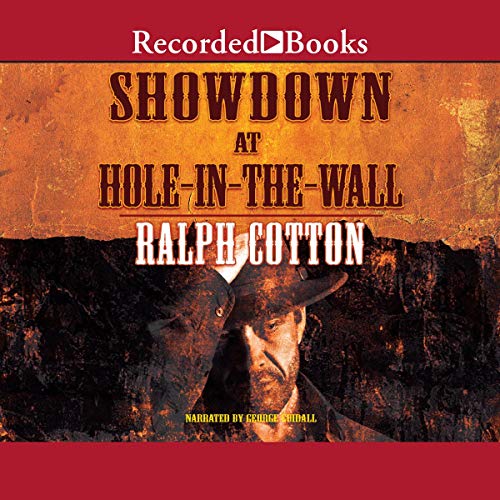 Showdown at Hole in the Wall

By: Ralph Cotton
Narrated by: George Guidall
Try for $0.00

Since the publication of his first novel in 1994, Ralph Cotton has impressed readers and critics alike with gritty tales of the Old West.

Some time ago, Arizona Ranger Sam Burrack caught a bullet in the back. After a winter spent healing, he's now traveling to meet Memphis Beck, leader of the notorious Hole-in-the-Wall gang and the man who saved his life. But another player explodes on the scene - an assassin known as the Dutchman. And as these three men's destinies intertwine, it becomes clear at least one of them will not survive the encounter.

What listeners say about Showdown at Hole in the Wall

Barkeep! That last western tasted so good, I reckon I’ll have another! Arizona Ranger Sam Burrack is heading to the Red Wall area to reclaim the stallion he left with Memphis Beck after being shot in the back. The Red Wall and Hole-In-the-Wall is a well-known area full of outlaws and killers. Along the trail Burrack’s path crosses with man hunter Conning Glick, known as The Dutchman, also known for his proclivity with poisons. Several parties of outlaws are added to the story each carrying out their own personal brand of mayhem and each being exposed to Burrack and his brand of justice. This is an interesting and complex story with great characters and plenty of action.