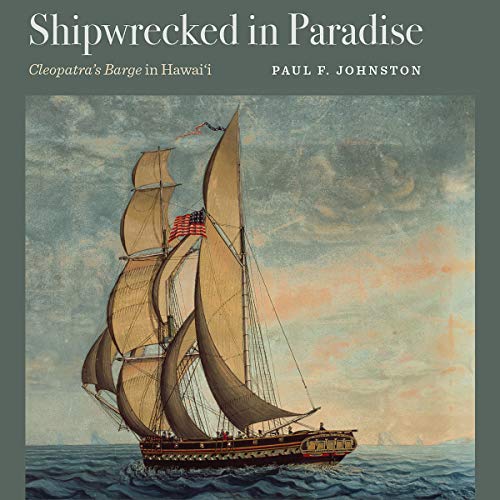 By: Paul F. Johnston
Narrated by: Doug McDonald
Try for $0.00

The first oceangoing yacht ever built in America, Cleopatra’s Barge, endured many incarnations over her eight-year life, from Mediterranean pleasure cruiser to a Hawaiian king’s personal yacht. The famed ship, at times also a Christian missionary transport, pirate ship, getaway vehicle, instrument of diplomacy, and racing yacht, wrecked on a reef in Hanalei Bay on April 6, 1824.

Obtaining the first underwater archaeological permits ever issued by the state of Hawaii, a team of divers from the Smithsonian Institution located, surveyed, and excavated the wrecked ship from 1995 to 2000. The 1,250 lots of artifacts from the shipwreck represent the only known material culture from the reign of King Kamehameha II (Liholiho), shedding light on the little-documented transitional period from Old Hawaii to foreign influence and culture. Although Liholiho ruled Hawaii for only a few short years, his abolition of taboos and admission of the Boston Christian missionaries into his kingdom planted the seeds for profound changes in Hawaiian culture. Shipwrecked in Paradise tells the story of the ship’s life in Hawaii, from her 1820 sale to Liholiho to her discovery and excavation.

"A must for archaeologists and nautical history fans alike." (Bookwatch)

“Paul F. Johnston is uniquely qualified to write not only about the history of the ship, but also how archaeology adds to our understanding.” (James P. Delgado, director of maritime heritage, NOAA's Office of Maritime Sanctuaries)

What listeners say about Shipwrecked in Paradise