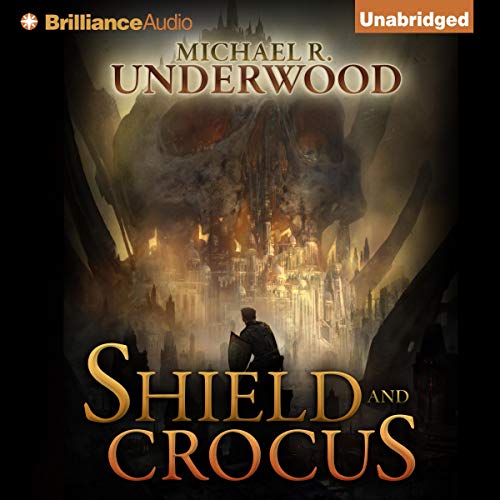 By: Michael R. Underwood
Narrated by: Luke Daniels
Try for $0.00

In a city built among the bones of a fallen giant, a small group of heroes looks to reclaim their home from the five criminal tyrants who control it.

The city of Audec-Hal sits among the bones of a Titan. For decades it has suffered under the dominance of five tyrants, all with their own agendas. Their infighting is nothing, though, compared to the mysterious "Spark-storms" that alternate between razing the land and bestowing the citizens with wild, unpredictable abilities. It was one of these storms that gave First Sentinel, leader of the revolutionaries known as the Shields of Audec-Hal, power to control the emotional connections between people - a power that cost him the love of his life.

Now, with nothing left to lose, First Sentinel and the Shields are the only resistance against the city's overlords as they strive to free themselves from the clutches of evil. The only thing they have going for them is that the crime lords are fighting each other as well - that is, until the tyrants agree to a summit that will permanently divide the city and cement their rule of Audec-Hal.

It's one thing to take a stand against oppression, but with the odds stacked against the Shields, it's another thing to actually triumph.

In this stunning, original tale of magic and revolution, Michael R. Underwood creates a cityscape that rivals Ambergris and New Crobuzon in its depth and populates it with heroes and villains that will stay with you forever.

What listeners say about Shield and Crocus

A very busy story, but it was a good listen .

I liked the book, I love the narrator. My problem was I kept flashing back to the Iron Druid series. I had to remind myself this is not that series (that I loved). Like I said it was a good book to listen to, I don't think I could have read it.

To use oversimplified common references, it was like a Marvel origin story to the Power Rangers or something, or Heroes, the TV series, turned into a comic book and then into a novel. It was a very neat story about how an underground group of heroes works together to keep the big villain group from squishing too many people. I haven't read anything like it before. Super neat concept!

Starts slow but is well worth the listen. the writer and reader give the story an amazing fully fleshed feel.

I wanted to return this ...

I'm not sure why I couldn't return it, I'm only 45 minutes into it and, well ... it's ... just not good. Not terribly bad - the idea is great, it could have really gone places, but the narration is poor and the writing needs polish and editing.