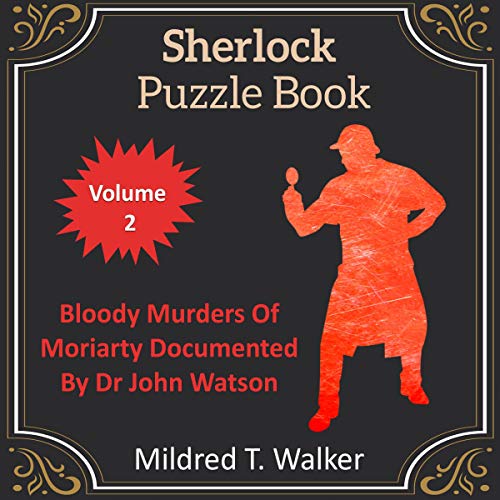 Holmes and I (Dr. John Watson) were called to Scotland Yard to help investigate a double murder on a train. The train-station managers were getting irritated because they weren’t allowed to let any trains leave until we got this murder solved.

The driver of the train was in the engine compartment while the conductor was at the caboose. The officer onboard thought they had been shot at the same time since he had heard the shots go off at the same time.

Holmes boarded the train and walked the entire length of it. He stopped in the very center of the train.

“Watson, how fast was the train traveling?”

“According to my notes, the train was traveling at 150 kilometers per hour.”

“Those men were not killed at the same time.”

How did Holmes know this?

Staged in the Victorian era, Holmes and Watson are back for more murder crimes by the evil nemesis Professor Moriarty. Packed with more than 20 challenging riddles, this audiobook is bound to give you hours of entertainment with your spouse, kids, and family. They are all set in the world of Sherlock Holmes and are shared by his trusty friend, Dr. John Watson. There are riddles in this audiobook for the beginner and advanced sleuths alike.

Awesome Brain Games for any age!

I bought this after my OT/Speech therapist recommended types of puzzles I should work on. I have slight brain damage from fixing an unruptured brain aneurysm with coiling and stent 4 years ago and my memory has been really bad. I really like most of the games/puzzles here with the exception of the crosswords (which I never liked beforehand either). I highly recommend this book of games for anyone needing to exercise their brains.

My brother who wont stay out of trouble said it kept him busy in jail :/ Recommend anybody who has a sibling or relative in jail to send them one of these. Also, amazon mails directly to the prison of choice just include prisoners name and id on the address.

Excellent variety of puzzles to keep you busy for quite a long time. This is great for those cold nights you just don't want to leave the house. This audible book introduced me to puzzles and now I am addicted to them.

Liked it so much, I bought another.

Received this as a retirement gift, and loved it. Caught my son-in-law working on some of the puzzles, so bought him one for Christmas. He and my granddaughter (10 yr old) are enjoying it. I even used one of the trivia puzzles about Ireland as a game for our St.Patrick's Day gathering.
One of the reviews said that the trivia was dated, but I think the target audience is older adults, and so just perfect.

Exactly What I Wanted and Needed

I wanted something to keep my mind active but also I wanted the challenge of a game and I wanted to be entertained as I learned new things. This book exceeded my wants. Its a great activity for me. I learn, I recall what I knew, I can do it at my own pace. But the activities are not so hard as to discourage me from continuing. The small amount I paid for this book is nothing compared to the hours of entertainment and fun and learning and mental exercise this book has given me. WELL WORTH MY MONEY. I am going on 70 years old and I appreciate the opportunity to get away from the insanity of most of the TV programs. Can't say enough good things about this book except to look for the next book.

Love this book - obviously since I gave it 5 stars. I've purchased other books that are supposed to be "brain" games, puzzles, etc., only to be so disappointed once they arrive and find out that they are nothing but word search puzzles or some such. This is definitely worth the money. A variety of quizzes that I've never seen before. You will be in for lots of fun, and you don't have to be a word freak or such to enjoy this book. I just ordered the sequel and cannot wait for it to arrive.

This book is the perfect game book. A lot to make you think about that aren't easily done. Even the word searches are a challenge they don't just give you a list of words like the puzzles you did in school They give you a question and you find the words that pertain to the answer.I sent this to my girlfriend & she really enjoyed it!

This book is exactly what I wanted to gift my wife who had been looking to get a nice collection of mixed puzzles of varying levels.
Great for puzzle people.

The variety of puzzles will keep you entertained!

Excellent book! It's very big in size not something you can carry in your purse..I really love the brain games, the variety of puzzles will keep you entertained. Great for travel or for kids!

This book was bigger than I expected. It is filled with activities to keep you entertained and keep your brain active.

I love this book. All the puzzles are really fun to do!!!! recommend to you for listen

I am a Sherlock Holmes fan since my teens; of course, I like a good puzzle. This is the kind of book I would have enjoyed then (and that I enjoy now)
This book contains all type of puzzles, riddles, and brain teasers. There are crosswords, visual puzzles, mazes, mathematical and card games of different levels of complexity with tie-ins to canon Holmes stories; some are simple and quite straight forward, others not so much. The clues lead to a map where we will solve a bigger mystery.
As an adult, I enjoyed the book immensely but I think it can also be a great way to introduce the younger readers into the timeless detective. The art of the book is also lovely, and it has a Victorian feel.
Despite receiving a digital copy for free, I will buy a physical copy of this book - I would love to add it to my Sherlockiana collection!

Dad surprised with the gift. Have had several good laughs from the book. Jokes are corny but we've had fun with them.

She loves Sherlock Holmes and this is the perfect

I bought this for my daughter's birthday gift. She loves Sherlock Holmes and this is the perfect gift for her. It's full of puzzles and very challenging. I know she'll love it.

I bought this for a class I teach to senior citizens to keep their brains active. If they don't like the material, they absolutely let me know. They are enjoying the book thus far. I've only listened about the first 15 chapters, but usually, after only a few pages we know whether it's a keeper or not. The is an answer key at the back which is also really helpful. Easy to challenging activities.