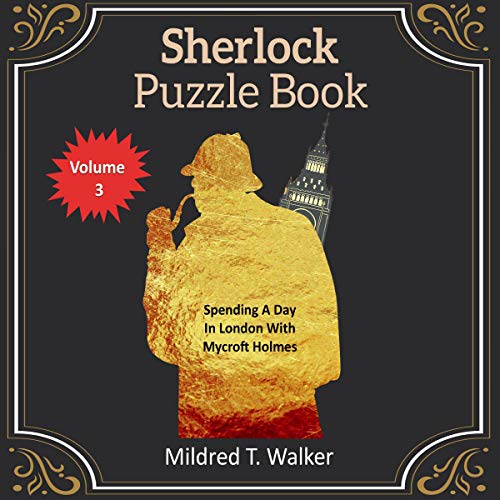 Holmes, his brother Mycroft and I were sitting in the local pub drinking ale and smoking. Holmes had just helped Scotland Yard solve another case, and he felt like celebrating. We agreed to play a game of billiards while chatting about our days. We hadn’t seen Mycroft in several weeks, so he was ready to regale us with tales of what he called an adventure. His version of an adventure was sitting in courtrooms or at Scotland Yard to see what was happening.

He was laughing so hard at a riddle he had heard while sitting in the back of a courtroom that we were having trouble understanding what it was he was saying. We let him laugh himself out and then asked him to repeat it, so we could enjoy some of the laughs.

“I swear this is exactly what I heard in that courtroom. The defense attorney asked the prosecutor this question: Dana’s mother is the mother of three daughters. One of her daughters has the name of Betty while the other one is named Kathy. What is the name of her other daughter?”

The final book of the Sherlock Puzzle Book series is finally here! Set in the world of Sherlock Holmes and shared by his trusty friend, Dr. John Watson.

This time, Watson and Holmes join Mycroft with more entertaining riddles in London There are riddles in this book for the beginner and advanced sleuths alike.

Come and work alongside one of the best detectives in the world, Sherlock Holmes. The puzzles and riddles within these pages are sure to keep you occupied and entertained for hours!

Excellent quality puzzle book! Especially for the price. Much nicer than the monthly magazine.. The book has an interesting premise, and there is an over-arching story in addition to the actual puzzles, which vary in style and level of difficulty, and don't have to be solved in a printed order. I'd like to see other books of Mildred T. Walker , I'd definitely buy them!

I love this book very much! Not very hard. But fun to work puzzles. great!

i think this book is so practical and relevant to our problems, issues and lives in today's world. A great manual for both our subtle and chronic, seen and unseen troubles. Great book!

Very interesting listen. Wish author had gone a little deeper into the effects; however, the book is targeted more to the general public than scholars

There are word searches, quizzes, unscrambles, logic puzzles, cryptograms, and two or so other types of puzzles. And there are lots of them. So kind of repetitive, but if you enjoy those kinds of puzzles there are plenty to keep you occupied. Glad I bought it.

Gift for my son

He loves playing with this and solving the Puzzle. really a great puzzle and quality are amazing! It's wonderful!

The book provides numerous hours of enjoyable challenges. Very well done. The artistic presentation adds to your enjoyment. Some are classic conundrums in a different setting.

Join Holmes and Watson in this fun puzzle book!

I’m a big fan of Sherlock Holmes mysteries and have the complete annotated collection in my personal library. I read and re-read Holmes and Watson mysteries often with great pleasure. When I saw this puzzle book, I knew I had to check it out.

Filled with over 130 logic puzzles, riddles, and interesting brain teasers told from the point of view of Dr. Watson, this is a treasure for mystery and puzzle lovers alike. Each puzzle has a link to the solution as well as a link to the next puzzle which makes navigating this book a breeze on any device. The puzzles range from super easy to difficult, doesn’t take more than a few minutes each and reading it is a great brain exercise.

This puzzle book reminded me of back in my youth when I devoured Encyclopedia Brown books. It’s better, though, because it’s Holmes and Watson. The age range is middle grade to adult, although I’m sure the author has geared it for adults. It’s clean so parents don’t have to worry about the content.

If you’re a Sherlock Holmes fan and looking for fun brain-teasers to read through on your commute or while you’re waiting for the kids to get out of school, pick this up right away. It would make a superb gift, too!

Perfect gift for a puzzle solver

Perfect gift for a puzzle solver who has everything. I bought this as a gift. My mother has solved a crossword and other word puzzles every day for as long as I can remember. These look like they will provide a decent challenge and plenty of variety. And I can't argue with the price.

Fun, interesting & challenging!! I am very pleased & would highly recommend this book. I really like this audible book.

There is a MISSING CLUE in one puzzle.

Attention to all those who have bought or will buy the book. When I got this book as a gift, I could not solve any of the logic grid puzzles. I wrote to the grid puzzle authors in care of the publisher and enclosed a sample puzzle from the book. It was MISSING A CLUE! I just wanted you to be aware that you must have it to solve the puzzle.

The puzzles are cool and some are pretty hard

The puzzles are cool and some are pretty hard, I'm certainly no consulting detective.
However, the bummer is a friend and I both ordered a copy of this and then a week later she found it as a board game! A wicked cute board game with all these extras and fun stuff rather than reading puzzles out of a book. If you're thinking about buying this I recommend going to find the game instead.