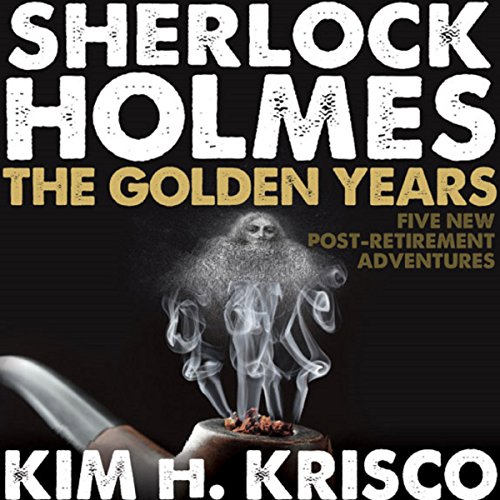 Sherlock Holmes lamented, "I fear that retirement will elude me." It surely does in this five-story chronicle.

The saga begins with The Bonnie Bag of Bones that lead the infamous duo on a not-so-merry chase into the mythical mountains of Scotland and ultimately to the "the woman" who is tangled within a mystery that has haunted Holmes for a quarter century.

Curse of the Black Feather continues the adventure in which Holmes teams up with the Irregulars and a gypsy matriarch, to expose a diabolical "baby-farming" enterprise. Their quest arouses a vicious adversary, Ciaran Malastier, who has Holmes struggling for his very life.

Maestro of Mysteries begins with a summons to Mycroft's office and ends with a deadly chase in Undertown, far beneath the streets of London. Malastier escapes, but only into the next adventure.

The Cure that Kills sees Holmes and Watson in hot pursuit of Ciaran Malastier, racing across America and pitting them against the largest detective organization in the world.

In the final story, The Kongo Nkis Spirit Train, Holmes and Watson travel to the Dark Continent to derail a "spirit train" that ensnares people's spirit, and enslaves their bodies. In the end, this historically accurate chronicle sheds new light on greatest mystery of all, Sherlock Holmes himself.

What listeners say about Sherlock Holmes the Golden Years

What made the experience of listening to Sherlock Holmes the Golden Years the most enjoyable?

The added dimension of Sherlock Holmes as a mature person, later in his life, and the experiences that made him seem more fully human.

Yes, I wanted to, but I kept falling asleep as I usually listen to my audiobooks at bed time. So I kept starting it over and finally got through it in 2 days time.

There is so much I could say but I don't like to give spoilers for the simple reason that I don't want to color anyone's experience or the impact of hearing the story first hand.

I can tell you that for me, Kim H. Krisco made Holmes come alive in a very real sense for me. I had always seen him as larger than life, and beyond the mere failings of those of us with feet of clay. Holmes has always been portrayed as so intelligent, yet without real depth of emotion, very shut off from his feelings.

For me Kim H Krisco brought Holmes to life in a very real way.

Would make a decent children's cartoon

This is one of the weaker Holmes efforts . Dont bother the writing lacks all mystery and used all the easiest Holmes cliches. The narrator often sounds like a halting computer speaking

I am not sure I can get through this entire book. The narrator is so bad. the accents 4 Holmes and Watson change from English to Scottish and back. and every other character speaks with the same hesitation after each word. the only difference between the characters is the men have lower voice and the women have a little higher voice. it's extremely frustrating. the Cadence is the same. The only time Holmes and Watson sound correctly is when the narrator speeds up

Would you listen to Sherlock Holmes the Golden Years again? Why?

Story in the true style of Conan Doyle. De Britiannia's manages the many, many voices/characters so well. His "Holmes" is perfect!

So many memorable characters -- Cinka the gypsie woman is a great one, as is the Aussie Lucas Murdoch in the last story - The Kongo Nkisi Spirit Train.

What about Richard Di Britannia’s performance did you like?

His Sherlock Holmes was perfection. But I had to admire his ability to handle the well over fifty characters in these stories -- including many women. He is a real talent!

Holmes gets better with age!

Makes me want to get the book now. Sherlock Holmes - The Golden Years is one I want to have in my library.

I love the voice and u nail all the characters! Absolutley magnificent! Keep doing what ur doing.

The First Book I Have Ever Deleted Halfway Through

Heads up - I am English. I speak, more or less, the same language as Conan Doyle. The author is American and is targeting a largely American audience in his writing: "fall" for "autumn", "speak with" "meet with" etc. References to shops, restaurants etc are almost exclusively the ones that are still in business eg Rules and Mulberry which is a little clunky as is the seemingly gratuitous historical references eg sinking of the Titanic without developing the event at all.

The choice of reader is interesting. Richard Di Britannia has a strong Yorkshire accent - nothing wrong with that you might say and yes the latest screen incarnation of Holmes was by Yorkshireman Ian McKellen - however as we can assume that both Holmes and Watson were public school educated and any regional accent would not be so pronounced. However the reading style is slow (for Americans?) and idiosyncratic. Stress seems to be placed oddly and grated on my ears.The "he said" and "she said" elements should be "thrown away if not excised but here get an unnecessary prominence.

All this gets in the way of the story and there are some good ideas but in this reading anyway I was never gripped by the narrative. And then...there seemed a couple of malapropisms: "crenulated" for "crenellated" "sedimentary" for "sedentary". After the latter I had to stop the car and wind back because I though I had miss-heard but no there it was. I stopped the recording and turned on the radio.

So I found this reading ponderous and one only for "completists".Of course these things are a matter of taste but there really should be a health warning for British readers.

the worst Sherlock I have heard

Poor stories, mistakes in the text. There were many mis-pronunciations in the narration which was very distracting. I didn't enjoy the book.