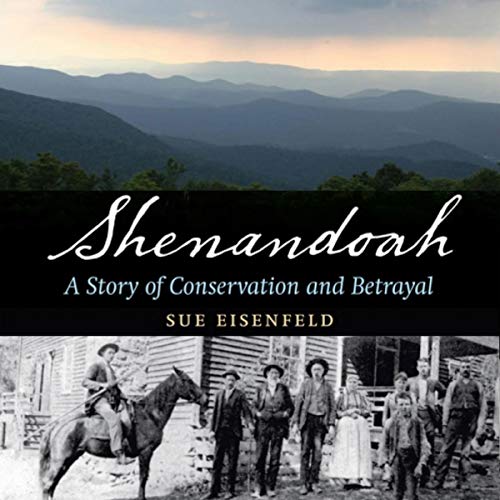 Shenandoah: A Story of Conservation and Betrayal

By: Sue Eisenfeld
Narrated by: Gloria Mason Martin
Try for $0.00

For 15 years, Sue Eisenfeld hiked in Shenandoah National Park in the Virginia Blue Ridge Mountains, unaware of the tragic history behind the creation of the park. In this travel narrative, she tells the story of her on-the-ground discovery of the relics and memories a few thousand mountain residents left behind when the government used eminent domain to kick the people off their land to create the park.

With historic maps and notes from hikers who explored before her, Eisenfeld and her husband hike, backpack, and bushwhack the hills and the hollows of this beloved but misbegotten place, searching for stories. Descendants recount memories of their ancestors “grieving themselves to death”, and they continue to speak of their people’s displacement from the land as an untold national tragedy.

Shenandoah: A Story of Conservation and Betrayal is Eisenfeld’s personal journey into the park’s hidden past based on her off-trail explorations. She describes the turmoil of residents’ removal as well as the human face of the government officials behind the formation of the park.

In this conflict between conservation for the benefit of a nation and private land ownership, she explores her own complicated personal relationship with the park - a relationship she would not have, without the heartbreak of the thousands of people removed from their homes.

"Eisenfeld writes about Shenandoah the way Annie Proulx writes about Wyoming or Edward Abbey about the deserts of the Southwest: pristine, unsentimental, eloquent prose." (Kirkus Reviews)

"Beautifully captures the mountain people and the official vendetta that made them refugees from their own land." (Washington Times)

"Anyone with an interest in national parks…will appreciate this book." (Library Journal)

What listeners say about Shenandoah: A Story of Conservation and Betrayal