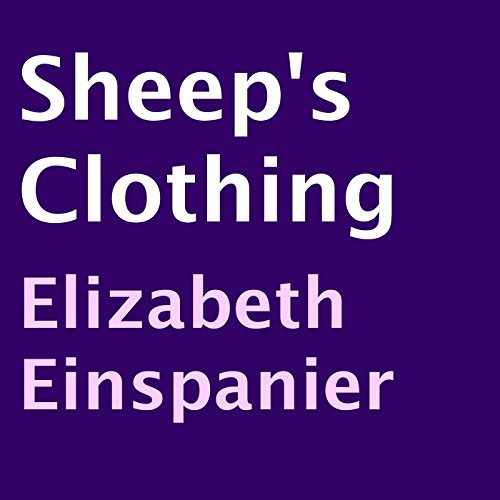 Doc Meadows, frontier doctor working in the small town of Salvation, has always considered himself a sensible man and has not believed in monsters for a long time. When injured half-Indian Wolf Cowrie staggers into his practice one night, however, he brings terrifying news - a vampire he hunts plans to settle in Salvation and turn it into his own private larder. Now Doc has to overcome his skepticism and fear in order to face down this new threat to his town, before Salvation becomes just another ghost town in the territories.

Well-developed protagonists. A wonderfully classic vampire antagonist. Some of the " old stuff " just what the world needs. I always enjoy seeing horror brought to a western or frontier setting. I found it to be thoroughly enjoyable.

It is this refusal to impose current ideology

Sheep’s Clothing by Elizabeth Einspanier has all the potential of a great book. Her Vampires display all the traditional characteristics of the classics, no sparkling or glittering in sunshine for Alexandre Russeau, trying to overcome the monster within by munching on wild game or attempting to assimilate into the community by being Mr Nice-guy or getting in touch with his feelings, in fact Russeau very much reflects the more traditional vampires to such an extent that I felt that any moment in the book he would be revealed as a descendant of Dracula himself. It is this refusal to impose current ideology on her ‘monsters’ that most appealed to me in Elizabeth Einspanier’s text; most modern vampire fiction attempts to humanise fictional ‘evil’ in line with contemporary needs to justify and explain the reasons for ‘evil’ itself; as a society we seem to apply the ‘nature vs nurture’ physiological debate to fictional and non-fictional ‘characters’ alike with the winning ‘nurture’ often justifying atrocities in the name of a ‘bad childhood’ or not being loved enough. Not so in Einspanier’s text, here there are no ambiguities and we are urged to pick up our pitchforks and our burning torches (or we would be if Doc and Wolf had not come to the rescue) and smite the ‘vicious and feral‘ vampires with no reservations.

Another interesting aspect of Russeau and his ‘brides’ is their OCD-like need to count, while Arithmomania was common to vampires in early folklore, in literature it now seems to be limited to the Muppet’s Count von Count, and for good reason; if Vampires were so easily distracted that a simple sprinkling of rice could keep them busy for hours and hence keep their potential victims safe, wouldn’t every vampire hunting kit contain a bag of basmati? I can’t help but reimagine all the great vampire showdowns; who needs stealth, cunning and bravery…Van Helsing seems a lot less impressive armed to the teeth with lentils but I like the inclusion of this characteristic in Einspanier’s vampires, it enhances the folklore background of the narrative.

Sheep’s Clothing is good escapism, it is fast moving and action packed but I would have loved it to be a bit longer so I could engage with Doc Meadows and Wolf’s back stories a bit more as I’m sure their fight against Salvation’s villain would have been more poignant if the reader was a bit more invested in the two men and their relationships but perhaps this would hinder their traditional fight against evil.

This is set back in 1874 in the small town of Salvation. When an out of town injured visitor, Wolf, knocks on Doc Meadow's door in the middle of the night, he takes him in and treats his wounds only to find out there is more to the story than just a simple brawl. It seems Wolf is in town to hunt vampires. All of this is a little much for Doc to digest, until he meets the vampire himself. This is a very old school type of vampire story, where the simple things like a crucifix, silver, stakes, etc, are the best weapons. It's a great old style vampire story.

The narrator did a great job! The characters all sounded different enough that it was easy to know who was talking at all times and his voice was easy to listen to.