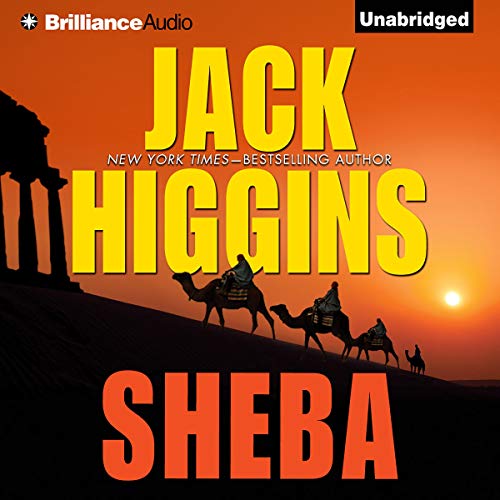 By: Jack Higgins
Narrated by: Christopher Lane
Try for $0.00

On the eve of the Second World War, as German armies gather to invade Poland, Hitler has hit upon a master plan to distract the British while the blitzkrieg takes place. A German archeologist from Dahrein, Otto Muller, who has just made a sensational discovery, is summoned to Berlin.In Dahrein, the Spanish-held port on the gulf, Gavin Kane, an American trader, and Ruth Cunningham embark on a search to find Ruth’s husband, an archeologist who has disappeared in the desert while on a quest to find the long-lost temple of Sheba. With little to go on but the ancient testament of a Greek adventurer, Alexias, the only survivor of a Roman expedition of 24 BC, Kane and Cunningham venture into the inhospitable Empty Quarter, the Rubh al Khali, a region of outlaws, treachery and death.Calling on all their reserves of cunning and ingenuity to survive the deserts and its denizens, they are drawn inexorably onwards by the overwhelming allure of Sheba. When they finally reach their destination, they stumble upon a conspiracy that could have devastating consequences for the world. Inspired by one of his early novels, now long out of print, Sheba has all the hallmarks of a vintage Higgins thriller.

What listeners say about Sheba

the story and performance

Have you listened to any of Christopher Lane’s other performances before? How does this one compare?