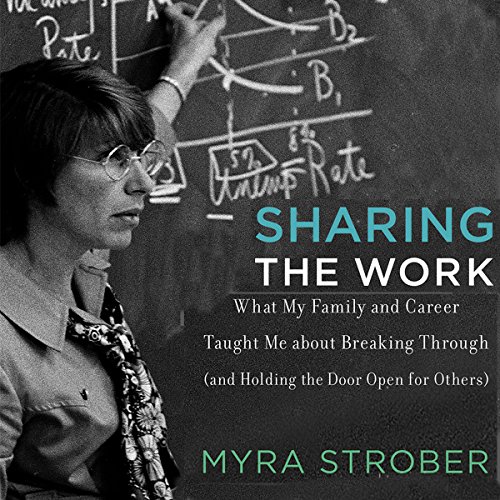 By: Myra Strober
Narrated by: Laura Jennings
Try for $0.00

Myra Strober became a feminist on the Bay Bridge, heading toward San Francisco. It is 1970. She has just been told by the chairman of Berkeley's economics department that she can never get tenure. Driving home afterward, wondering if she got something out of the freezer for her family's dinner, she realizes the truth: she is being denied a regular faculty position because she is a mother. Flooded with anger, she also finds her life's work: to study and fight sexism, in the workplace, in academia, and at home.

Strober's generous memoir captures the spirit of a revolution lived fully, from her Brooklyn childhood (and her shock at age twelve when she's banished to the women's balcony at shul) to her groundbreaking Stanford seminar on women and work.

In the 1970s, the term "sexual harassment" had not yet been coined. Occupational segregation, quantifying the value of work in the home, and the cost of discrimination were new ideas. Strober was a pioneer, helping to create a new academic field and founding institutions to establish it. But she wasn't alone: she benefited from the women's movement, institutional change, and new federal regulations that banned sex discrimination. She continues the work today and invites us to join her.

The book is published by MIT Press.

"Both women and men will find a friend in these pages." (Gloria Steinem)

"Strober's compelling story is a page-turner, a home run! It should be required reading in business, law, and all of the social sciences." (Irma Herrera, former Executive Director, Equal Rights Advocates)

"In this beautifully written book, Myra Strober deftly combines her personal story with the changes in women's lives during the last part of the twentieth century… A wonderful read." (Lotte Bailyn, MIT Sloan; author of Breaking the Mold: Redesigning Work for Productive and Satisfying Lives)

What listeners say about Sharing the Work

As a Working Mother, I could relate to so much of what Mira discusses in this book. I believe it is a must listen for both men and women.