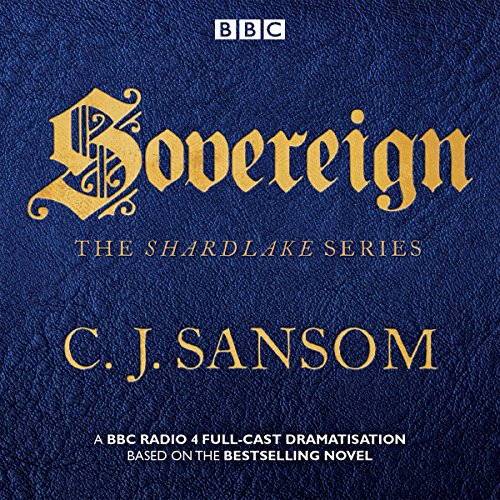 Autumn, 1541. King Henry VIII has set out on a spectacular Royal Progress to York, aiming to strike fear and awe into his rebellious northern subjects. Shardlake and his assistant, Barak, arrive in the city a day ahead of the 3,000-strong procession. Officially there to prepare petitions for the King, they have also been tasked with a secret mission by Archbishop Cranmer: to ensure the welfare of one of the Northern conspirators, Sir Edward Broderick, who is to be brought back to London for questioning in the Tower.

Tensions are running high in the city, and soon Shardlake is called to investigate a suspicious death - and stumbles upon a daring plot that has the potential to shake England to its core.

Fast-paced and suspenseful, it is both an engrossing murder mystery and a brilliantly realised portrayal of Tudor England.

What listeners say about Shardlake: Sovereign

This broadcast was a terrific overview of C. J. Sansom’s book also titled Sovereign. I missed the details and Steven Crossley’s take on Shardlake. I did enjoy hearing the correct pronunciation of some of the words and it is nice to hear the different voices.

I have read all the series and will now listen to all . Top class

Just love the whole series, have read the books, which there was more
Keep writing

Julian Salinger reigns supreme as Shardlake. He brings warmth, sophistication and compassion to the character and is a delight to listen to

So well researched you would almost believe you were there. Well executed plot. I've read the books and this dramatisation brings it to life.

Well done BBC. I love this series and this play was fab. My third Shardlake play.

Really enjoyed this interpretation. Performers excellent. Will definitely look to buy the other dramatised books in this series.

A faithful adaptation of the novel.

Another high quality dramatisation of the Shardlake novels. Not sure if people who have not read the book would follow.

Having read all of the Shardlake books, these radio full casts productions are a good adaptation. Well acted, atmospheric and draws you into the Shardlake era.

I have all the Shardlake radio series and over all, excellent for what they are. But you cannot beat the good books.