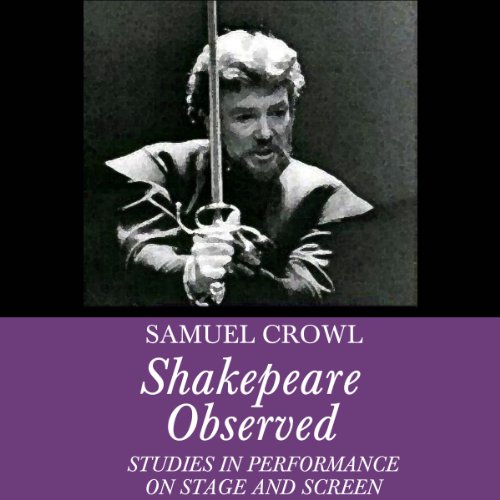 In this lively study of both modern film and stage productions of Shakespeare, Samuel Crowl provides fascinating insights into the ways in which these productions have been influenced by one another as well as by contemporary developments in critical approaches to Shakespeare's plays.

Crowl's study demonstrates the surprising resonances between Roman Polanski's 1971 film of Macbeth and Adrian Noble's heralded recent production of the play for The Royal Shakespeare Company; argues that Orson Welles's films of Othello and Cabins at Midnight are not only brilliant reimagining of Shakespeare in another art form but make a powerful contribution to our contemporary understanding of performance as interpretation; and chronicles the impact of Peter Hall's creation of the Royal Shakespeare Company, in 1960, on performance approaches to Shakespeare in the past 30 years.

Shakespeare Observed provides full interpretative readings of key recent Shakespeare productions in England and includes an intimate behind-the-scenes glimpse into the rehearsal process that produced Ron Daniels's emotionally charged version of Romeo and Juliet for the RSC in 1980.The final chapter uses Kenneth Branagh's highly successful film of Henry V as a summary example of the trends and influences Crowl's study traces, seeing the film as gathering its interpretative energies from both Olivier's famous film version of the play and Adrian Noble's stage production featuring Branagh as the king.

Written in a style that places a premium on capturing the vivid and often dazzling moments of stage and film performances of Shakespeare, Crowl's study will be of interest to the avid film and theatergoer as well as to the scholar and student. Shakespeare Observed joins a growing list of recent critical works that have significantly expanded and redefined the boundaries of Shakespeare studies in our time.

" Shakespeare Observed belongs in the library of anyone interested in the progression of the Shakespearean text from page to stage to screen." (Kenneth S. Rothwell, University of Vermont)
"The whole piece is suffused with perception and clarity." (Peter Hall, The Peter Hall Company)

What listeners say about Shakespeare Observed

Excellent book with good insights into Shakespeare and his works. Recommended for anyone lookig to dive deeper into the bard

This is a really good book to listen to

This is a good book. I really Liked this book. The narration of this one is good