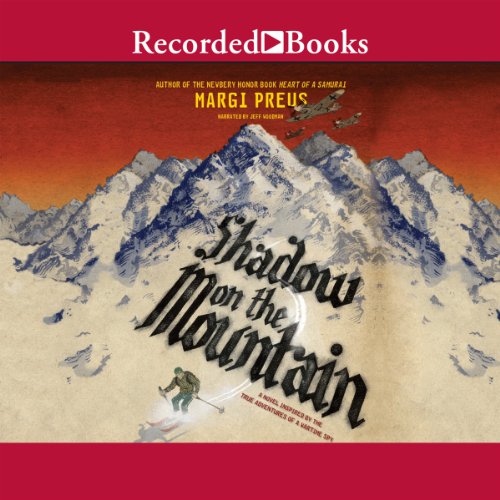 Shadow on the Mountain

By: Margi Preus
Narrated by: Jeff Woodman
Try for $0.00

Shadow on the Mountain recounts the adventures of a 14-year-old Norwegian boy named Espen during World War II. After Nazi Germany invades and occupies Norway, Espen and his friends are swept up in the Norwegian resistance movement. Espen gets his start by delivering illegal newspapers, then graduates to the role of courier, and finally becomes a spy, dodging the Gestapo along the way. During five years under the Nazi regime, he gains - and loses - friends, falls in love, and makes one small mistake that threatens to catch up with him as he sets out to escape on skis over the mountains to Sweden.

Preus incorporates archival photographs, maps, and other images to tell this story based on the real-life adventures of Norwegian Erling Storrusten, whom Preus interviewed in Norway.

"Newbery Honor winner Preus infuses the story with the good-natured humor of a largely unified, peace-loving people trying to keep their sanity in a world gone awry. Based on a true story, the narrative is woven with lively enough daily historical detail to inspire older middle-grade readers to want to learn more about the Resistance movement and imitate Espen’s adventures." ( Kirkus Reviews)
"This engrossing offering sheds light on the Norwegians’ courage during World War II. Preus masterfully weds a story of friendship with the complications faced by 14-year-old Espen and his friends as Nazi restrictions and atrocities become part of their everyday lives.... This is at once a spy thriller, a coming-of-age story, and a chronicle of escalating bravery. Multidimensional characters fill this gripping tale that keeps readers riveted to the end." ( School Library Journal)
"A closely researched historical novel...relates this wartime tale with intelligence and humor.... Ms. Preus deftly uses together historical fact (Espen is based on a real-life spy) and elements of Norwegian culture to conjure a time and place not so terribly long ago." ( The Wall Street Journal)

What listeners say about Shadow on the Mountain

Loved the book. I wish it had a stronger ending but I suppose that shows how good the story was.

We loved the historical value of it but I was disappointed in the abrupt ending.

My 10yr old son and I loved this book.

If you could sum up Shadow on the Mountain in three words, what would they be?

Much is written about WWII, but this story is unique in that it's from Norway, a region not always given much attention by the west. My only regret is that I wish we would have listened to it a year earlier when my son was researching a topic on nonviolent resistance for a school project.

Espen's character and emotion is real.

Ingrid feeding the prisoners. Also, Kjell and Espen's discussion in the snow near the end that both were "only trying to do the right thing" was a deep concept prompting discussion and so relevant even today.

Very much like the added material on the end that explains the real life stories from which the author researched.