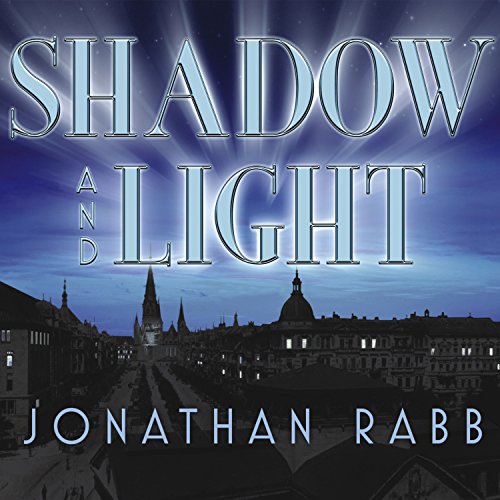 Berlin, between the two world wars. When an executive at the renowned Ufa film studios is found dead floating in his office bathtub, it falls to Nikolai Hoffner, a chief inspector in the Kriminalpolizei, to investigate. With the help of Fritz Lang (the German director) and Alby Pimm (leader of the most powerful crime syndicate in Berlin), Hoffner finds his case taking him beyond the world of film and into the far more treacherous landscape of Berlin's sex and drug trade, the rise of Hitler's Brownshirts (the SA), and the even more astonishing attempts by onetime monarchists to rearm a post-Versailles Germany. Being swept up in the case are Hoffner's new lover, an American talent agent for Metro-Goldwyn-Mayer, and his two sons: Georg, who has dropped out of school to work at Ufa, and Sascha, his angry, older son, who, unknown to his father, has become fully entrenched in the new German Workers Party as the aide to its Berlin leader, Joseph Goebbels.

Shadow and Light is brilliant and atmospheric, and hard to put down or shake off. Like Joseph Kanon or Alan Furst, Rabb magically fuses a smart, energetic narrative with layers of fascinating, vividly documented history. The result is a stunning historical thriller, created by a writer to celebrate---and contend with.

(NB: This is the second book of a three-book trilogy and many of its major characters appear in the first book, “Rosa.” Although the plot of “Shadow and Light” is self-contained, I strongly suggest that, in order to get the full impact and understanding of the relations between the characters, this book be read after its prequel).

Jonathan Rabb does it again: an exciting, dense plot set within the darkness of 1920s Weimar Germany. If anyone wants to know what a “noir” book is, “Shadow and Light” can be a prime example. If Germany were about to descend into the abyss, Rabb’s characters and scenario were ahead of their time. As in the first book, “Rosa,” I was impressed and captivated by Rabb’s historical research and his masterful weaving of some historical personages (e.g., Fritz Lang, Joseph Goebbels, Peter Lorre) and actual events, into a fictional crime/political intrigue/police procedural. And, it is seldom that one finds in a book of this type, the family drama that Rabb has engineered with total plausibility, into the very fabric of a crime novel. While Rabb’s protagonist, Kriminalpolizei Chief Inspector Nikolai Hoffner, is about as flawed a leading character as one is likely to find, his pursuit of the truth provides his one endearing attribute, so that, in spite of his unenviable personal life, one wishes him well. I can’t wait to read the final book in this series. I’m hooked on Jonathan Rabb and his Inspector Hoffner.

As usual, the narrator was excellent.

What a find for the price

I like Kerrs' books so I thought I would try this one because it sounded like his kind of writing. It is a darn good read for the price. Good reader also.
Of course , I love to study this period in history. I don't care if it is written by Jews or Germans, it is always a study in the human animal.

The book is not "noir" - it is clinically depressing. Compound that with a reader who mumbles in a fuzzy British accent. I listen while driving and with the volume up to painful levels could follow about half the book's text. I am an avid audiobook fan and lasted for one hour into this one on sheer willpower. Avoid it!