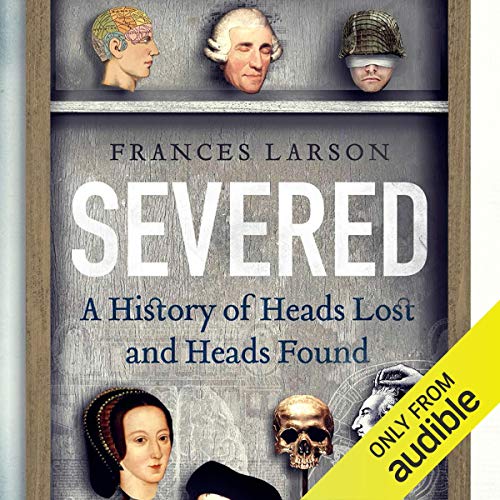 By: Frances Larson
Narrated by: Reay Kaplan
Try for $0.00

A serious and seriously entertaining exploration of the dark and varied obsessions that the "civilized West" has had with decapitated heads and skulls.

The human head is exceptional. It accommodates four of our five senses, encases the brain, and boasts the most expressive set of muscles in the body. It is our most distinctive attribute and connects our inner selves to the outer world. Yet there is a dark side to the head’s preeminence, one that has, in the course of human history, manifested itself in everything from decapitation to headhunting. So explains anthropologist Frances Larson in this fascinating history of decapitated human heads.

From the Western collectors whose demand for shrunken heads spurred massacres to Second World War soldiers who sent the remains of the Japanese home to their girlfriends, from Madame Tussaud modeling the guillotined head of Robespierre to Damien Hirst photographing decapitated heads in city morgues, from grave-robbing phrenologists to skull-obsessed scientists, Larson explores our macabre fixation with severed heads.

What listeners say about Severed

Good book, well researched. Note- it's Saint LOUIS, not Louie. No one calls it Louie.

The info in this book was great, I spewed so many new found factoids to my hubby he said I was starting to creep him out haha. The end of the chapter on WWII, and leading into the 21st century war beheadings, in my opinion, got a little preachy/rambled. After that it jumped right back into some neat history.

The narrator did well also.

Goes in all sorts of interesting directions!

When I first got this book a thought it would cover the obvious stuff like the French Revolution and Anne Boylen but it really riveted me. It went in all sorts of directions I wasn’t expecting! Like the craze for frenology, how to make shrunken heads, and the moment a skull becomes less human and more object. An amazing look at history and full of interesting ethical questions. Would 100% recomend!

Interesting, but pretty repetitive. Probably better to read it in bits than listen to it.

interesting enough, but not enough details

If you’ve listened to books by Frances Larson before, how does this one compare?

I have not listened to another book.

Do you think Severed needs a follow-up book? Why or why not?

No, unless the author can give a lot more details, rather than just relating facts

The book doesn't hold your interest after the first third. It turns into a relating facts