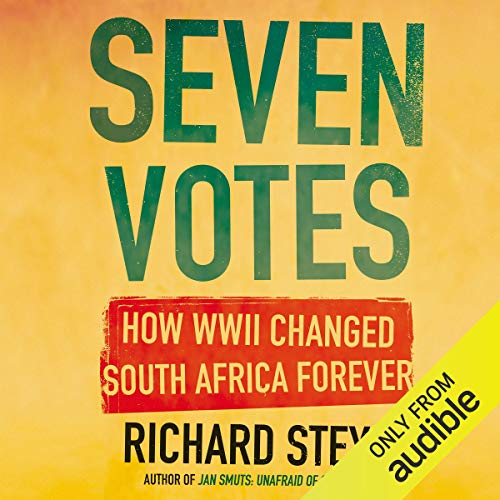 By: Richard Steyn
Narrated by: Peter Noble
Try for $0.00

If a mere seven more MPs had voted with Prime Minister JBM Hertzog in favour of neutrality, South Africa's history would have been quite different. Parliament's narrow decision to go to war in 1939 led to a seismic upheaval throughout the 1940s: black people streamed in their thousands from rural areas to the cities in search of jobs; volunteers of all races answered the call to go 'up north' to fight; and opponents of the Smuts government actively hindered the war effort by attacking soldiers and committing acts of sabotage.

As Richard Steyn recounts so compellingly in Seven Votes, the war's unforeseen consequence was the boost it gave to nationalisms, both Afrikaner and African, which went on to transform the country in the second half of the 20th century. The book brings to life an extraordinary cast of characters, including wartime leader Jan Smuts, DF Malan and his National Party colleagues, African nationalists from Anton Lembede and AB Xuma to Walter Sisulu and Nelson Mandela, the influential Indian activists Yusuf Dadoo and Monty Naicker and many others.

What listeners say about Seven Votes

Not as good as Steyn's other work

Although very interesting and wide-ranging, at times at felt as if the author gave agency to the action of going to war, where his own facts suggest more that it just happened to occur while the war and it's consequences were also playing out.

The performer mispronounced some names that he himself pronounced correctly in Steyn's book on Smuts.