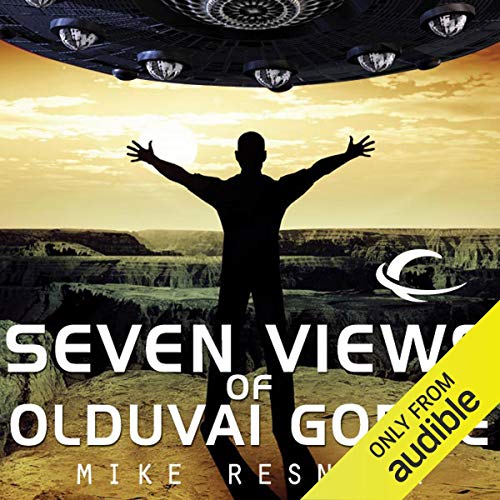 Thousands of years after mankind has become extinct, a party of alien archaeologists try to learn the mysteries of mankind as they excavate in a gorge on Earth. This Hugo and Nebula Award winning novella by Mike Resnick is a gripping exploration of human origins and motivations.
©1994 by Mike Resnick (P)2008 Audible, Inc.
Anthologies & Short Stories
Show more Show less

What listeners say about Seven Views of Olduvai Gorge

This is essentially a sequel to, or the unwritten extended ending to, Resnick's earlier defining work Birthright: The Book of Man. If you enjoyed that, this is a must read. If you've not yet had the pleasure, pick that up first.

I started listening to this not realizing this. I was still captivated and enthralled. I love this piece. When I realized the connection it got even better.

While it certainly stands tall on its own, I believe it's best understood with the full background laid out in Birthright. If you read in it only a depressing epilogue consider first the glory, determination, and hubris that preceded it.

If you still don't buy my review next to the negatives, don't miss the notes of it's winning both the Hugo and the Nebula awards.

This is a wonderful story in the style of Asimov, Heinlein, Clark and Herbert. It is a wonderful thought provoking story about the history of man and his impact on the earth and and the rest of the universe. The story if so well written you will want to keep listening all the way through.. Very enjoyable !!

An alternate view of humanity's progress

The audio version of this book has an interesting forward by the author in which he explains that his book is about humanity – “Sci fi writers may write about other races, other times, and other worlds, but all these other races, times and worlds are simply metaphors to help readers achieve a better understanding of the human condition, which is what all fiction is about.” This is as good an explanation of scifi as any I have heard, and worth remembering the next time an acquaintance gives me that sideways look when I happen to mention that I like scifi.

The novella itself was interesting to me for two reasons: First, because it was set in Africa and featured mainly African characters. This is not a continent that novelists—particularly scifi novelists--use as a backdrop very often. In the interest of diversity alone, it made for an interesting setting, but it also made perfect sense to set a novel about humanity in the very spot where our species first emerged.

The second reason I found the story interesting was because, unlike much scifi, it does not raise up humans as special in the universe because of some supposedly unique, positive qualities like our ability to love or our ability to sympathize. Rather, it posits that humans will make a mark for themselves because of their uniquely ruthless and violent nature. I wouldn’t want to exclusively read books that take this negative view of humanity, but I did find Resnick’s take refreshing.

We of the Western democracies (I am a white woman from the US) tend to think that the history of mankind is one long series of achievements, wherein man has conquered obstacle after obstacle through sheer Force of Will and Manifest Destiny. What was refreshing about this book was that it examines the possiblity that many, if not all, of our so-called achievements were built on the shaky foundations of violence, exploitation and downright racism. It is a truth that people from third world countries and the “99 percent” know from bitter personal experience. I applaud Resnick for tackling this unpopular subject matter and for doing it in such a unique and understandable way.

[I listened to this as an audio book performed by Jonathan Davis, who did a very good job].

A very fitting follow up to his Birthright: Book of Man which leaves one with an undefined feeling at the end which was an excellent book. This book was creative and thoughtful. Good novella.

Had it not won the Nebula and Hugo awards, I would never take the time to offer comments about a read I didn't much enjoy, but as it stands, I wonder what the Nebula and Hugo folks were thinking when awarding this piece an award as the best novella in 1994 and 1995, respectectivly. This is not a good book, short, long or otherwise.

A clever and interesting title, but the book is a simplistic and morally wan exploration of the human condition and character. The characters are stupid and brutish, the scenes each formed from some representative object, into a tableau of human history, in its entirety, is appropriately critical, but neither artfully rendered, or insightful beyond the pedestrian.

The plot is driven by the stupidity and unscrupulous behavior of its humans, and a truly banal group of investigatory aliens who respond to human behavior with only novelty and incredulity, as if the nature and history of a race that has, in this fictional universe, ruled wide areas, with much strength, go wholly unknown.

The points made in this novella are all fair, and I would never question them on their own merits. They only lack scope and imagination one likes to see in the genre. In the plainest, there is nothing new here, in terms of character, or story. It's fine to portray the race of human narcissistic brutes, but we're not nearly so stupid as Mr. Resnick depicts in this awful novella.

Short and interesting look at humanity

Essentially, a coalition of alien races is exploring the site where humankind originated (Olduvai Gorge) and discovering some "examples" of (now extinct) mankind's history. As the title would indicate, there are 7 examples of man's past (pre-historic, ancient, modern, future) - all of which indicate just how ruthless, power-hungry and destructive mankind is.

It's not told in a depressing manner, but there are no "good" moments; humankind's worse moments are shown here, possibly because those are the moments that will be best remembered by future generations?

The narrator is okay. The story is short (and perhaps overpriced for such a short story?) but it's interesting and entertaining and I'm glad I listened to it.

Bad to the bone

Who knew? Mankind the scourge of the Universe. Enslaver of millions (MILLIONS???) of worlds. Gone, but not forgotten.

Good writing and good narration, but a depressing book about humanity. If you are in the market for a really downbeat book this is it.

If you hate humans, you'll love this book!

I was hooked - listened to it all in one go (with the odd cup of tea) because I just had to know what all the 'views' were and what the 'conclusion' would be - and the book certainly didn't disappoint. Quite depressing in a way as the story portrays humans as being incredibly bellicose and permanently on a course to 'self destruct'. Made me think 'Is this an accurate social commentary? Are we really that bad?'. Maybe we are. So, a very interesting listen and thought provoking too. Well worth it.

I listened to this within minutes of purchasing it and was hooked from start to finish. With shades of 2001: A Space Odeseey and plenty to say on African oppression and the violence of man, this really was riveting.

I must admit I saw the ending coming a mile off, but it never the less brought the story full circle.

When it finished I simply commented, to no one in particular, 'good stuff!'