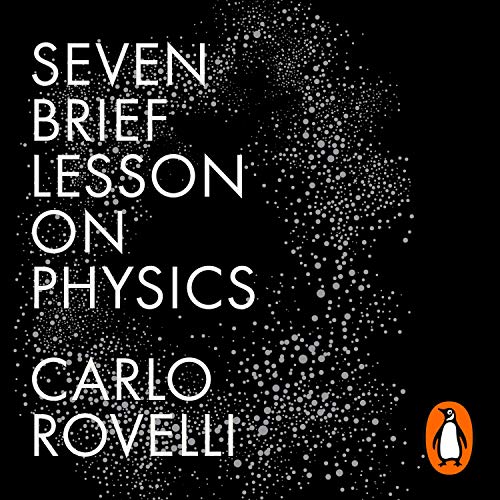 Penguin presents the unabridged, downloadable audiobook edition of Seven Brief Lessons on Physics written and read by Carlo Rovelli. These seven short lessons guide us, with admirable clarity, through the scientific revolution that shook physics in the 20th century and still continues to shake us today.

In this short, playful, entertaining and mind-bending introduction to modern physics, Rovelli explains Einstein's theory of general relativity, quantum mechanics, black holes, the complex architecture of the universe, elementary particles, gravity, and the nature of the mind.

In under 100 pages, readers will understand the most transformative scientific discoveries of the 20th century.

Not since Richard Feynman's celebrated best seller Six Easy Pieces has physics been so vividly, intelligently and entertainingly revealed.

Carlo Rovelli is an eminent physicist with an extraordinary ability to write about complex topics in a lucid, clear prose. His book was top of the best-seller charts in Italy for months and has sold over 200,000 copies since publication in November. He is the head of the Équipe de Gravité Quantique at the theoretical physics department of Aix-Marseille University. It has sold in over a dozen languages.

What listeners say about Seven Brief Lessons on Physics

Stephen Fry you are needed

What an incredible book. Needs a fluent English speaker to give dummies like me less to focus on when trying to understand something so vital

Carlo has a beautiful narrating voice. It helps to bring the ideas to life.

the most breathtaking summary of everything I've learned till now. amazing rendition. privileged to be the audience. thank you.

Sadly, great content is clouded by very bad narration (inadequate pronunciation). It was hard to completely enjoy the book.

not as good as Realty is not what it seems.

This covers much the same ground as Rovelli's other book Realty is not what it seems. The later however is a little better presented and thus I would say better Value. There isn't any need to buy both.

what an amazing book

A fascinating little book, but the narrator's heavily accented English is sometimes difficult to follow. I think it would have been better read by a native English speaker.

Small but full of joy

A fantastic audio experience. Straight to the point some of the most complex theories out there explained layman's terms just a joy to listen to.

This book came highly recommended to me. However, I was disappointed mainly because I found the narrator not engaging and difficult to keep up with. It wasn't an easy listen. However, I bought this book for my sister who is about to do astronomy gcse as I think the actual material is good.

A physicist turns into a novelist

Carlo's The Order of Time was brilliantly enlightening ... this became personal poetry ... stick too physics Carlo.

It's remarkable how much territory Carlo Rovelli can cover in these short discussions. Thought provoking and original

I came away from this with not a bit of greater understanding. While books by the likes of Brian Greene or even the very short An Introduction To... series aim to give some detail of, say, the structure of atoms, how electrons behave or the questions over gravity, this book seems to merely summarise the broadest outlines, spending more time on summaries of the historical scientists involved in discoveries and wishy washy philosophising on the nature of science and what it means to be human. I was hoping to learn something about physics itself. It felt more like the outline for a glossy TV science doc than a book which was intended to really give the reader or listener any genuine insight into the structure of our world. A bit disappointing.

This was a really interesting book to listen to, however as per the title very brief

A great little physics lesson, well written and well narrated, I think it really adds substance having it read by the author since he knows exactly what he is trying to express

Perfectly to the core of reality. Wonderful and enlightening. A singular genius, both in physics but also in perspective.

I thoroughly enjoyed this, never thought Physics could be so poetic! it was great to hear the writer read his own work too.