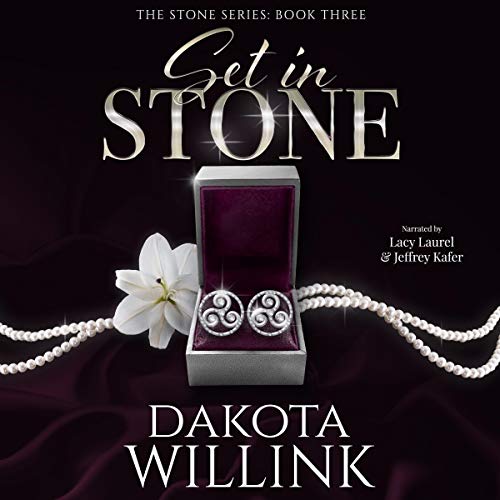 By: Dakota Willink
Narrated by: Lacy Laurel,Jeffrey Kafer
Try for $0.00

Two declarations of love. And a past that won’t set them free.

Alexander had rules. Krystina broke them. Together, they learned the hard way that life was too short to play the game. Choosing to not leave their relationship to Fate, they fell completely and irrevocably into one another. As two shattered souls, wrapped in each other’s arms, it was as if the world and all its troubles did not exist.

However, committing to love each other was only the beginning. Caught up in their blazing desire, they unexpectedly find themselves facing the shadows of the past once again. Just when Krystina thought she knew the man she committed to, more questions arise, causing her to wonder if Alexander is who he says he is. It should have been one of the happiest times in their lives, but the darkness still loomed, threatening everything they fought so hard to overcome.

Now Krystina is faced with a terrible decision: go against Alexander in order to save him or sit idly by and watch as his world shatters around him. For her greatest battle was the very thing their relationship was founded upon. Trust.

The heart-wrenching and seductive story of Alexander and Krystina concludes with Set In Stone, the powerfully moving finale to The Stone Series.

What listeners say about Set in Stone

Wonderful conclusion to a great story!

Dakota has left me on the edge of my seat this whole series. The last installment was no different! She did a wonderful job of wrapping up the series and also giving us new drama and excitement. I Loved the characters, I thoroughly enjoyed the roller coaster ride of drama and am sad to see it end. Great series and well worth the read!

The narration on this whole series was fantastic. Lacy and Jeffrey really did these characters justice. They added soul and emotion to every line and truly brought these wonderful characters to life. Amazing books only made better by Topnotch narration!

Perfect conclusion to the series

Set In Stone goes above and beyond anything I had expected. When going in, I expected it there to be some butting of heads, maybe an explosive fight or two, and then some hot make-up sex with a quick happy ending. That seems to be the usual track a final book takes in this genre. Dakota quickly put those assumptions to bed within the first few chapters. Don't get me wrong, this book contains all of those things, but they happen more than once. Just when you think the couple is at the point of their HEA, something big gets thrown their way and they have to figure out the best way to tackle it together. This entire series went above and beyond anything I could have hoped for when starting the first book. It is definitely going on my "To read over and over" list!

The narration was just as perfect as the story. Lacey and Jeffery did an amazing job bringing the story to life.

Alexander and Krystina have been fighting for their relationship but this battle can make them stronger or destroy them. The past that Alexander has kept hidden is now back and threatening to destroy everything I his life. Krystina must decide does she want to make the ultimate sacrifice or trust in Alexander. Great Conclusion to a great series. Great Narration. I was voluntarily provided this review copy audiobook at no charge by the author, publisher and/or narrator.

Just when you think an Author is heading one way BAM she surprises you with an epic twist in a story that you thought you knew everything about. These characters had to work their asses of to reach their HEA
Dakota Willink did a superb job with wrapping up this amazing trilogy.
In the end I've grown to like the female narrator more.

I thoroughly enjoy Willink’s writing and the narration takes it to a wonderful new level. I’ve thoroughly enjoyed this series and look forward to reading and listening to more. Wonderful.

I continue to love this story between Krystina and Alex!! Their love for each other makes me melt. This is the 3rd installment of this series and I highly recommend starting from the beginning. Krystina and Alex have moved to the next step of their relationship, but when secrets are discovered will their relationship survive? I continue to love Krystina’s character, she is strong and bold and I love that in a female lead. There is definitely mystery in this book too…. And I was very surprised!!! I loved this story and trilogy…and I absolutely LOVED the characters that Author Dakota Willink developed! Kudos!!!!🌟🌟🌟🌟🌟

Stunning conclusion, so much love and drama

The stunning conclusion to the Stone trilogy which had me anxiously listening for what happened next.

The Stone series comes to a close, with all of the mysteries answered and the bond between Alexander and Krystina tested in numerous ways.

While I understood and appreciated the dramatic aspect that Justine’s storyline brought, I thought she was selfish and caused more turmoil for Alexander and thereby Krys. I don’t think I’ve ever viewed her as a “good sister” to Alex. I did thoroughly enjoy reading more about Allie, Matteo, and Hale, and seeing how their lives were changing in the background to Alex and Krys’ story.

Wonderful conclusion to the series.

Set In Stone is the third book in The Stone Series: A Billionaire Romance by Dakota Willink. What a great ending to an action filled story. The mystery and suspense was a good mix with the romantic chemistry. Alexander and Krystina’s story continues in this book. Alexander’s secrets are about to be exposed, and Krystina is trying to stop the fallout. I loved this whole series and look forward to listening to more books by Dakota Willink.
The narration was done by Lacy Laurel and Jeffrey Kafer for the whole series. They did a wonderful job bringing the characters to life. Their voices melded great together and it was a pleasure to listen to.

Loved listening to this book

Set in Stone is the third book in The Stone Series by Dakota Willink. I have truly enjoyed listening to this series and the narrators do a wonderful job of bringing the characters to live. This is by far my favorite of this serie@ and I highly recommend reading/listening to this whole series if you haven’t started it yet. I found myself lost in the voices of the narrator and wanted more. I was on the edge of my seat in some parts and at some my heart was breaking. Alexander and Krystina are back in the conclusion of their story and what a ride its been. I couldn’t wait to get my hands on this and start listening right away. These two are yet again faced with decisions that could destroy what they have worked hard to build. When the past that was hidden comes back and threatens to destroy his life decisions are made. These will either save them or destroy them. Can she trust Alexander? Find out what happens next in this absolute must listen/read. I’m sad this series is done but I look forward to reading /listening to more from this Author.

This is the third book and my third audio by this author. I couldn’t wait to listen to it. I loved the previous two audiobooks which I would highly suggest before this one to help enhance your enjoyment of this series. I loved being pulled into the story of Alexander and Krystina by the narrator’s voice from the beginning. This is their conclusion to their story which I will miss but I can’t wait to see what this author has for us next. Their story is one of heart, secrets and an attraction like no other. Krystina is faced with a decision that will either make Alexander’s life come tumbling down or save his life. What will she do? I highly recommend this audio and this series. You don’t want to miss Alexander and Krystina’s story.

Set In Stone Audio book by Dakota Willink is the third book in The Stone series. For me I think this is the book that has had the strongest story line out of the three of them. It felt like we got to see a little deeper into the characters and their stories. However this is also the book where I became a bit more frustrated with them. At times I felt like I wanted to shout at them because of what they were doing or saying, which shows just how invested I was in them.

This has been a great conclusion to this series – one that I didn’t realise I even wanted until I started listening to it. My only criticism throughout the whole thing is that I wished sometimes the story didn’t rely so heavily on sexual aspect of it as I thought the storylines themselves were strong enough without it. However they have all been enjoyable and I would certainly recommend them.

a bad reharsh of 50 shades.

I'm really surprised at some of the reviews. the female narrator is really so bad. her pronunciation is all over the place and her male voice was so bad It's laughable. very disappointed that the story is a bad reharsh of 50 shades. some of the dialogue is very cheesy. I won't recommend this book.

This series has been absolutely fantastic. The emotion and feels in the writing is off the charts. I highly recommend it. It has a great balance of storyline and action with a good dose of sex in between. Both Lacy and Jeffrey are great narrator’s. I could listen toJeffrey all day and all night!