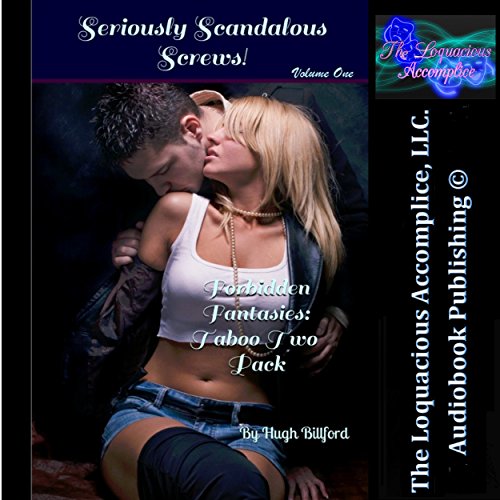 By: Hugh Billford
Narrated by: Desiree Divine
Try for $0.00

This audiobook is for mature adults only and contains very explicit taboo erotica and sexual situations!

"While I Was Away, My Wife Decided to Play!"

After viewing the security video, you hear someone cough behind you. Your wife clears her throat. You hunch over in the office chair and pretend not to hear her. Your hand scrambles for the mouse. You try to find the cursor on the monitor. That damn tiny arrow, you can't see it.

You feel a soft hand curl atop yours. You turn your head to the side and find that your wife is smiling at you. She looks down at your lap and smirks. Busted.

You had been jacking off to the video. Splooge covers your hand. Your wife reaches down and dips a finger into the gunk. With the tip of her tongue, she dabs a drop from her finger.

"But then you got turned on?"

Fashion Makes Me Want to Fuck!

As much as he outweighed her, Dan could have easily refused to budge. Yet Melody pulled him from the seat like she was plucking up a feather. Being the man of the house, he knew that he should stop this madness. He thought about the woman of the house. His wife would be pissed if she knew their girl was going to show off her sexy lingerie for him, in a public store no less. Not only did the taboo nature of it fail to stop him from following her, it compelled him to walk faster.