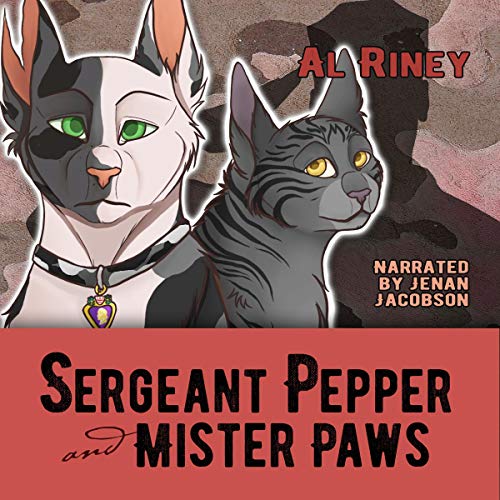 By: Al Riney
Narrated by: Jenan Jacobson
Try for $0.00

Private Rick Santos and the little cat who befriended him - Sergeant Pepper - are now famous war heroes: battle buddies wounded in combat and awarded the Purple Heart together. In foreign territory, they survived mortar fire and enemy insurgents. In domestic territory, they endured hospitals and therapy centers. Now, they’ll face their greatest challenge yet: civilian life.

When Rick is sent to a special facility for intensive post-traumatic stress therapy, he trusts his Uncle Ernest Gonzales in Florida with Sergeant Pepper’s care. In the foreign world of Hummingbird Circle, Sergeant Pepper encounters a clutter of six cats managed by the mild-mannered Mister Paws, the polydactyl pal of Uncle Ernest.

These lazy, quirky, and undisciplined house cats thoroughly annoy the disciplined Sergeant Pepper. With her army mind-set, she feels like a square peg jammed into a round hole.

War’s long tendrils soon reach into the cushy, relaxed existence found at Uncle Ernest’s home. When a gang of tough street cats and a vicious attack dog named Killer disrupt the peace of Hummingbird Circle, the army cat sees it as her duty to assist Mister Paws in overcoming the insurgency.

Only, this time, Sergeant Pepper faces an unexpected threat. She discovers something worse than enemy insurgents - her own deeply hidden PTSD. Can she overcome her own demons to save those in her charge? Will she ever be reunited with her best friend Rick?

Find out in Sergeant Pepper and Mister Paws, a wonderful new listen for ages 10 and up.

What listeners say about Sergeant Pepper and Mister Paws

Firstly, I want to thank Mr. Rainey for his service. Thank you. I thoroughly enjoyed listening to the story. I loved the cats and the unique personalities each have. It’s very much like cars in life. I thought this was very creative. I like how the book raised awareness for PTSD and service animals mixing reality, creativity and imagination. I highly recommend this book! Also, the narrator did a great job in distinguishing all the different personalities. She did a awesome job.