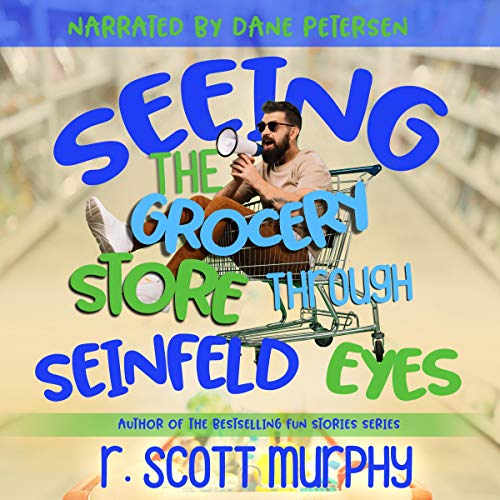 By: R. Scott Murphy
Narrated by: Dane Petersen
Try for $0.00

Do you enjoy watching Seinfeld? Have you ever been to the grocery store? Giddy up! Let the insanity begin.

This fun new humor book celebrates Seinfeld's 30th anniversary and takes love of the sitcom to a new level. Best-selling humor author R. Scott Murphy believes Seinfeld is far more than a TV show; it's a state of mind. In fact, he's watched all 180 episodes so many times that he often sees the world through Seinfeld's eyes. The place where his Seinfeld eyes see the craziest things is the grocery store.

That's why Murphy spent more than a year secretly observing people shopping, logging their peculiar activities in his diary, and commenting about those actions in his mind using the voices of Jerry, Elaine, George, and Kramer. You won't believe what he saw. Meet the cart shamers, the fruit fondlers, the superhero of savings, the grocery store Mary Tyler Moores, the shirt shockers, and many more.

You get 30 diary entries to help celebrate 30 years of Seinfeld. The fun doesn't stop there. Murphy continues celebrating the comedy of Seinfeld by spotlighting madcap characters, catchphrases, and all-round wackiness. Try your hand at Seinfeld trivia, grab a Seinfeld fan grocery list, and laugh all over again at the show's best moments.

If you like TV's most successful sitcom, you'll love R. Scott Murphy's crack-up-worthy Seeing the Grocery Store Through Seinfeld Eyes. Sweet fancy Moses, this book is an absolute must-have for any Seinfeld fan. Get it now!

What listeners say about Seeing the Grocery Store Through Seinfeld Eyes

Good book but needs to be adapted for Audible

I like the book and enjoyed the stories but unfortunately some books are not made for reading on Audible. I often have long drives in my work and I use Audible content to help pass the time and learn something. I wouldn't spend five hours though listening to a cookbook because you need the print in front of you to make a recipe.
In this case I am referring to the author's chapters which include three different 30 question quizzes of Seinfeld trivia and other Top 10 lists from different sources on favorite episodes. The quizzes don't work because you have to listen to all the questions first. then the answers are read one after the other without a reference to the question, if that makes sense. There were three chapters of this and it really. This is an example of what works better in print.
But being a Seinfeld fan, I did enjoy the stories and look forward to listening to other works by the writer.

I read this book when it first came out but I think I love the audio book even more! This audiobook got me through several long walks ! Laugh out loud funny!!