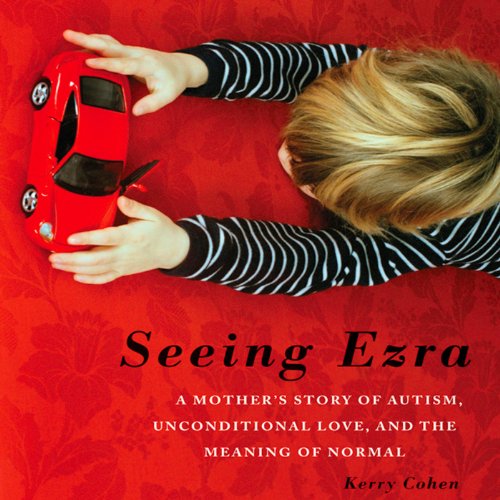 Seeing Ezra is the soulful, beautifully written memoir of a mother's fierce love for her autistic son, and a poignant examination of what it means to be "normal". When Kerry Cohen's son Ezra turns one, a babysitter suggests he may be "different", setting her family on a path in which autism dominates their world. As he becomes a toddler and they navigate the often rigid and prescriptive world of therapy, Cohen is unsettled by the evaluations they undergo: At home, Ezra is playfully expressive, sharing profound, touching moments of connection and intimacy with his mother and other family members, but in therapy he is pathologized, prodded to behave in ways that undermine his unique expression of autism.

It soon becomes clear that more is at stake than just Ezra's well-being; Cohen and her marriage are suffering as well. Ezra's differentness, and the strain of pursuing varied therapies, takes a toll on the family - Cohen's husband grows depressed and she pursues an affair - all as she tries to help others recognize and embrace Ezra's uniqueness rather than force him to behave outside his comfort level. It isn't until they abandon the expected, prescriptive notions about love, marriage, and individuality that they are able to come back together as two parents who fiercely love their little boy.

Powerful and eye-opening, Seeing Ezra is an inspirational chronicle of a mother's struggle to protect her son from a system that seeks to compartmentalize and "fix" him, and of her journey toward accepting and valuing him for who he is - just as he is.

What listeners say about Seeing Ezra

Too bitter and angry for me.

I am tempted to write some disclaimer about how everyone's experience differs and that one shouldn't judge the emotions and responses of others in difficult situations. But... then I think about this mother describing a scene where she she brings her newborn baby on a picnic in the course of an extramarital affair, where she drinks while nursing (descussing how she thinks the baby might be getting "a little tipsy, too"), then gets into the car with the baby and goes for a drive while "a little tipsy." This woman prejudges every medical or therapeutic professional she interacts with to the point that there's no chance that anything could possibly meet with success. But most problematically for me, reading this book has such a sense of anger, bitterness, and recklessness that it leaves me feeling grimy. I can't find the narrator at all likeable. I've read many similar books, with parents trying all sorts of things to help their children, from traditional medical approaches to rejecting such and diving deep into the child's world, but this is the only one where I ever felt that the parent's motivation was more about herself than about the child. Right before this I read "Bad Animals", which also had a narrator whose behavior and attitudes occasionally gave pause, but was somewhat likeable, very informative, and clearly motivated first and foremost by love for his child. Where other books have a good amount of "confessional" nature, with parents reflecting on the less-than-perfect actions they have taken in a regretful way, this one misses that regret, and seems to be actively flaunting bad behavior and dismissive of anyone's (especially the readers) concerns. Where the author claims to be saying to the world, "this is my son, accept him as he is", this book reads like a bratty teenager saying "this is me, accept me as I am".

But, heck, it's someone's experience. Maybe the reader made things seem worse than they would in writing. as sometimes happens. I think it's sad that there are people that are like the narrator APPEARS. Her attribution of bad intent to almost everyone who interacts with her son denies him a great deal of community and goodwill. It makes her, too, isolated. It seems to take away her joy in mothering, which is pretty much absent in this book, and must make her son feel that much leerier of social interactions. So, as one of many autism-parent-books, I think maybe it's OK for a different mental attitude (of the narrator, not towards autism)... but I could not recommend it as the ONLY book to read on the subject.

The author repeatedly comes back to the regret of having said a perfunctory "thank you" to people she didn't believe deserved her thanks. She opens by expressing her continually held rage at the person who first suggested that her son might be autistic. To avoid regrets such as the former, and to celebrate the latter, who could not leave something so important unsaid, I feel I should say this: Having been through the many, repetitive, and exhausting evaluations and tests and visits and such, with numerous organizations, I can say that I've never encountered anyone as cold and cruel as EVERYONE that Kerry Cohen describes. I'm not saying that there might not be a few bad apples, but the fact that she finds them so overwhelmingly cruel and uncaring says more about Cohen's prejudgement than about the process. This is a hard and often heartbreaking job, generally not very well-paid (especially when in the public sector). The people want to help. They may be biased towards an approach that they are familiar with, and especially which they feel they have had success with. It doesn't mean that they "value their theories more than the child". In general, these are warm people trying to help as best they can. Certainly we've all had times when we didn't think that a suggested approach or therapy was a good fit for our own situation, but we usually understand that it's just a mismatch, not cruelty or incompetence on the part of the "other."

A Mom Must Read

Love in the Time of Autism

Seeing Ezra is elegantly written, frank, and more importantly, not a manipulative “child-with-neurological-disease" tear-jerker. It's sincere and filled with lots of love.

Anyone with children can relate to the dichotomy between how you know your child to be as their own unique person and how the world sees him or her.

After describing a friend saying, “Autism ruined my life,” Cohen says, “Being misunderstood is pretty much the number one experience for people like us.” She knows what her friend means—and what she doesn’t. There is real despair and resentment with something like this, but that doesn’t take away from the love.

I was particularly struck by the medicalization of her son’s personality. How things just got worse and worse for the whole family the more they tried to “fix” her son, and really only started to get better once they started to just accept him as he was.

Narrator, Jenna Berk brings out all the vulnerability inherent in a narrative like this, but also the toughness required.