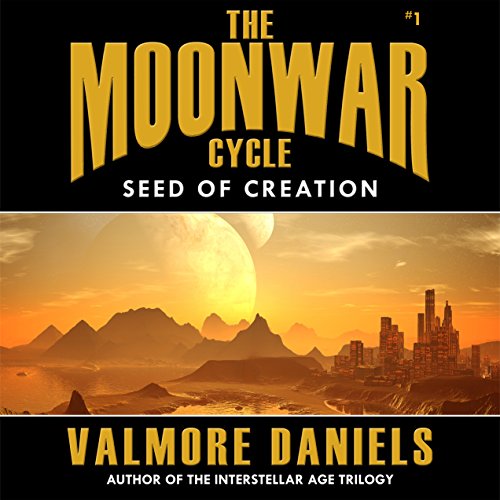 By: Valmore Daniels
Narrated by: David Di Seur
Try for $0.00

Seven moons orbit a lone planet in a distant star system. The inhabitants of Oraluno, the middle moon, believe theirs is the only civilization in existence.

On the night of a dark crossing, Lonas, a nobleman's son, sees something in the sky that should not be. When his father is assassinated in front of him, his quest for justice leads him to a shocking discovery. The killers are technologically advanced soldiers from a neighboring moon. They seem unstoppable.

In a whirlwind of adventure that takes him from one side of the moon to the other, Lonas uncovers the true history of his world, lost for millennia.

Once that knowledge gets out, it will bring all seven moons to the brink of war....

What listeners say about Seed of Creation

Yes, I would recommend this book. I enjoyed the story. It's Hobbit meets StarTrek with more Hobbit than StarTrek. I am looking forward to the next book in the series.

The world building in this book is fantastic. I found myself engrossed in the story, and how everything in this story was wrapped up by the end, but still had you looking forward to the next book. One thing that really stood out was that the main female character - she's not a damsel in distress. Good job!

It took a little while to get used to the way some of the words and phrases were used. The narrator made it a bit more difficult to understand some words that seemed to be mispronounced.

Should be juvenile science fiction

No. It is written for a teenaged audience.

Would you be willing to try another one of David Di Seur’s performances?

Unsure. The narration was not terrible but the story line was not robust enough.

Did Seed of Creation inspire you to do anything?

This book was provided free in exchange for review. I thought from the description and the label of science fiction it might be interesting. But it turned out to be a juvenile level book with the two main characters always eager to accuse each other of guilt and never being able to develop any real relationship with those around them. For someone who was supposed to rule a country it was unbelievable.

The writing is weak and the narration is robotic. If I can't even get through an hour, I just can't keep listening. It's like throwing good money after bad. Waste of time & money