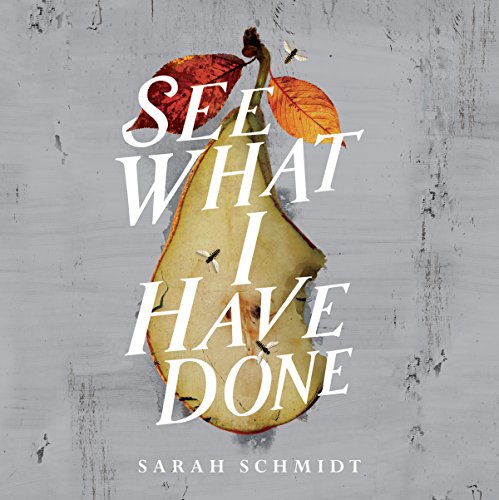 See What I Have Done

Haunting, gripping and gorgeously written, See What I Have Done by Sarah Schmidt is a reimagining of the unsolved American true crime case of the Lizzie Borden murders, for fans of Burial Rites and Making a Murderer.

When her father and stepmother are found brutally murdered on a summer morning in 1892, Lizzie Borden - thirty-two years old and still living at home - immediately becomes a suspect. But after a notorious trial, she is found innocent, and no one is ever convicted of the crime. Meanwhile, others in the claustrophobic Borden household have their own motives and their own stories to tell: Lizzie's unmarried older sister, a put-upon Irish housemaid, and a boy hired by Lizzie's uncle to take care of a problem.

This unforgettable debut makes you question the truth behind one of the great unsolved mysteries as well as exploring power, violence and the harsh realities of being a woman in late 19th-century America.

What listeners say about See What I Have Done

even better on audible

I've owned a hardback version of this book for a long time, this is better.

A story about a spoilt sociopath

I have to say I found Lizzie Borden's character detestable even though there were instances where her father's harsh behaviour showed. She is manipulative and spoilt, a classic sociopath and while the murderer is never openly stated, it seems very likely she had a hand in it. I felt extremely sorry for her elder sister Emma, who seems to have to put up with her behaviour. Either way, I don't feel this novel added much to this infamous tale.

Couldn't finish it, it's so overly descriptive

Incredibly overly descriptive to the point it becomes repetitive and dull. lt's like the author had thesaurus out at all time. Performances were great though.

Something rotten in the Borden household

You might have thought that enough has been written about the 1892 murder of Andrew and Abby Borden, brutally axed in their home in Falls River, Massachusetts, and the trial of Mr Borden’s youngest daughter Lizzie. Sarah Schmidt’s visceral first novel is now added to the pile and adds another dimension to the unsolved case but, like all the rest, she can only conjecture more than 100 years after Lizzie was acquitted of murder who really did commit it. But she does that very well.

The pleasure is in the picture Schmidt creates of the stifling, unhealthy Borden household. Emma and her younger sister Lizzie Borden are in their early thirties living with their overbearing and harsh father Andrew (Emma calls him a ‘vile man’), their much unloved step-mother Abby, and the homesick Irish maid Bridget. They share this ‘home’ seething with ill feeling, resentment, anger, casual cruelty, frustrations and jealousy, as well as foul stenches (you need a strong stomach for many of them) and poisonous sulphurous atmosphere (both literal and metaphorical) trapped in the fetid heat. The relationship between Lizzie and Emma is bound by inter-dependence, fierce love, mutual loathing and distrust and is powerfully portrayed leaving us with the strong suspicion that Lizzie could indeed have been the murderer. But nothing is that simple…

Apart from Lizzie and Emma, there were other severely disgruntled members of the larger family – an uncle, Mr Borden’s abandoned illegitimate son – with their jealous eyes on the Borden property, and Schmidt makes their testimony part of this chilling re-telling. Bridget the Irish house servant has a narrative voice of her own and she is a fully rounded and sympathetic character caught in this super-dysfunctional family desperate to escape back to her own family in Ireland.


Mostly Schmidt keeps to the ‘facts’ of the case – Mr Borden slaughtering the pigeons which Lizzie loved; the process of the Trial; a hint of lesbianism in Lizzie, and so on. When she adds fiction she goes – for me – totally wrong. Emma is supposed to be marrying Samuel and the pre-marital sex between the two of them is completely incredible for the early 1890s both as fact and in virgin Emma’s sexual technique. There are many such anachronisms which irritated me: no-one had duvets in the early 1890s, nor did they constantly use the phrase ‘any time soon’!

Next time, it would be interesting to see how well Schmidt can write without the scaffolding of real-life events which have been written about so much before. The three narrators do an excellent job in creating the very different complex personalities.