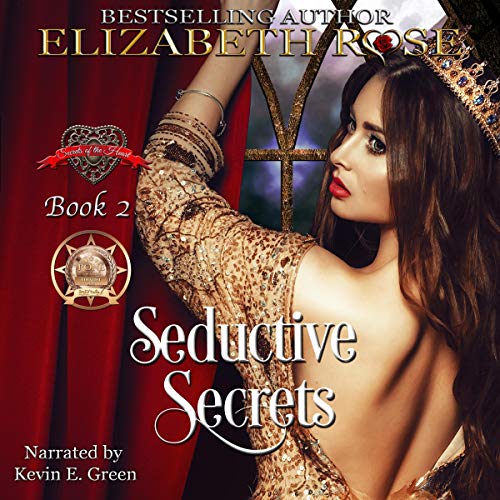 Lady Willow Douglas holds the powers of persuasion and can charm men with her appearance as well as her words. But when her skill doesn't work on Sir Conrad Lochwood, he becomes a thorn in her side. The autumn festival is about to start, and all the eligible, rich, single noblemen are arriving. She has decided to find a husband, but unfortunately, her father has other plans. He's hired Sir Conrad to keep her away from all the men until his return.

When a visiting earl's prize ruby is stolen, Willow steps in without hesitation to use her skills to figure out which of the guests is the thief. But with Sir Conrad constantly looking over her shoulder and dragging her away from everyone, she finds it difficult to accomplish anything. She is a member of the queen's secret group of strong women and feels the need to find and return the ruby to help the earl out of a terrible predicament that involves the king.

Can a strong woman determined to catch a thief accomplish her task before a dashing knight steals her heart instead?

Be sure to listen to Highland Secrets - audiobook one of the series as well.

What listeners say about Seductive Secrets

What a wonderful fun love story. Kevin E Green was perfect narrating it. Willow was the daughter of Rook. He was one of the bastard triplets. If you haven’t heard about them, grab them! I loved them all.

Three cousins, granddaughters of King Edward, the eldest daughter of each of the Legendary Bastards of the Crown are called to the king’s deathbed to receive a bequest from Queen Philipa. The girls are allowed to choose one of the late queen’s crowns as a gift and given a heart pendant, the symbol of the special group of women known as the Followers of the Secret Heart. Each of the girls is trained to use their talents to become strong and powerful women. Willow’s talent is persuasion, but she has until now used it only for her own benefit. Perhaps the time has come for her to learn to use her talent for the good of others.

Seductive Secrets is the second book in Elizabeth Rose’s Secrets of the Heart series.
The story of Lady Willow Douglas and Sir Conrad Lochwood is an interesting and sometimes humorous love story. These two have known each other since childhood. They are not, at the beginning of the story’ particularly fond of each other. Conrad, at the request of her father, does his best to keep her away from the men gathered for a festival and tournament and out of trouble. She is not happy about his guarding her and gives him the slip every chance she gets. They are both quite determined to fight their growing attraction for each other. This one looks like a long, uphill climb to HEA.

A creative and unpredictable story and a range of wonderful characters keep you turning pages right up to the end to see what happens next, or at least what Willow will do next. Conrad and Willow are great together and opposite each other. There is mystery when a series of thefts occur in the castle, a tournament with brides as prizes, and Conrad’s younger sister who needs a friend (maybe Willow). This series just gets better. I look forward to the next book. I recommend this one and the series.

In the audio version, Kevin E. Green does a fantastic job of bringing this story to life. You can hear the frustration in Conrad’s voice and the haughtiness in Willow’s.

the heroine in this book is so unlikeable I had to force myself to listen till chapter 11 and I just couldn't take it anymore..

The 2nd book in the series is about Lady Willow Douglas one of the eldest daughters of one of the Legendary Bastards of the Crown and Sir Conrad Lochwood. I thought the book was very well written, kept your interest and Kevin E Green made the story come alive. This book had wonderful characters and you want to keep listening to see what happens next. There is mystery when a series of thefts occur in the castle, a tournament with brides as prizes and so much more. I am looking forward to listening to the next book in the series. I recommend any book by Elizabeth Rose and I know that you will not be disappointed.

I received this audiobook from Elizabeth Rose and I am giving an honest review.

Elizabeth Rose this series is fantastic!

Lady Willow Douglas is one of the 3 Granddaughters of
Queen Philipp. While awaiting the Fall Festival to.arrive
so Willow can charm the suitors. A man from her
childhood shows up. Its Sir Conrad Lockwood the
boy who tormented her as a young girl.
He doesn't like how Willow flirts and charms
the Noble men.
A love story blossoms.

Willow’s story is a well written, intriguing, captivating romance. But what made this story so incredibly beautiful to me, were the little life lessons gently woven throughout the story. As we watch the transformation of a shallow, vain girl, turn into one who’s inner beauty shines and selfless acts make her more beautiful than any outer adornment could. This is truly a beautiful story. A must have.

Willow and Conrad have known each other since children but have not seen each other in years. Willow is very full of herself. Conrad is drawn to Willow even though she has a reputation of being a huge flirt.

I enjoyed this story of the two meeting again later on in life. After disliking each other when they were younger, they are put in a position of ward and guardian while Willow’s father is away. And I always like when there is a mystery to solve. It was easy to follow even though I have not read the previous book. I also thought the narrator did a good job alternating between male and female voices. I would definitely read or listen to more books from this author.

A lovely story of a young woman maturing from man crazy to a caring and giving woman. As always, Kevin E Green does an excellent job narrating the story. it's also nice to see that annoying young boys can grow to be caring young men. A mystery thief throws a spanner into the works with a surprising outcome.

Loved this 2nd book of the series Secrets of the Heart. This series is about the daughters of the Legendary Bastards. This is about Willow, Rooks daughter. I love this narrator. He's got such a nice voice. And has a different voice for every character. This book is definitely worth a credit Now on to the next one, Myra's story.

This book was amazing and told the tale of Willow who was the daughter of Rook, one of the Kings Bastard Triplet Sons. She was a girl who flirted with men and persuaded them to do as she willed. At the Manor where she and her two cousins were staying they were due to have a fete and games and despite the fact her Father and his brother decided to take the three cousins to the Highland’s to visit Fia, who had just had a baby. Willow then decided that she was ill and refused to go with them. Her Father knew of Willows weakness and organised his Knight to watch her every move and keep the men away from her. He had a very difficult job. The story has many twists and turns, and the narration was excellent. I loved this story. Thank you Miss Rose for a wonderful book.