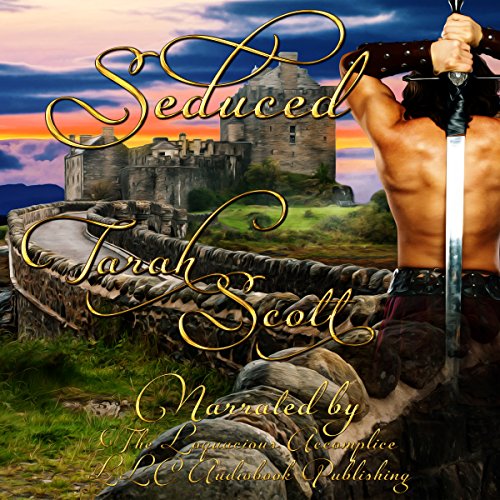 By: Tarah Scott
Narrated by: Desiree Divine,Joel Leslie
Try for $0.00

It's a Mississippi Deputy Sheriff's duty to bring a serial killer to justice...even when he's a 300 year old Scottish lord. It's an SAS agent's duty to save her.

With each passing day, Lord Colin Morrison grows more furious...and more desperate. In 300 years, not one of the women who shared his bed broke the spell that imprisoned him in Castle Morrison. Margot Saulnier is different. She can save him. All she has to do is give in to her desire for him. Then die.

Deputy Sheriff Margot Saulnier knows her best friend murdered her husband-Margot's cousin-but she can't prove it. Now, four years later, out of the blue, Cat calls Margot from Scotland and invites her to visit. Margot turns in her badge and leaves Mississippi. This time, she'll do whatever it takes to prove Cat murdered Donny. Margot didn't plan on falling in love with an SAS Agent-or a 300-year-old Scottish lord. Now she must choose.

SAS Agent Charles McNeil is going to keep Margot Saulnier out of trouble-whether she likes it or not. He understands her need for justice, but with no proof and no authority, she's headed for serious trouble. So is he. Charles didn't plan on falling in love with Margot. Neither did he plan on saving her from a serial killer.

What listeners say about Seduced

What was one of the most memorable moments of Seduced?

This book was interesting and Margot was a unique heroine. She has a wild streak that followed her from her youth. This story was quite unique in its makeup and you will enjoy many twists and turns. It was very when written and quite entertaining.

Seduced by a Highlander

What made the experience of listening to Seduced the most enjoyable?

Even tho this is set in modern times, I prefer my Highlanders of the 17th century or earlier. With this book I get to experience their wonderful Scottish brogue. I would not have gotten this experience with reading a non audio book.

I liked this story line of a Deputy Sheriff quitting her job to go after the bad guy, her friend, to prevent her from killing more people. I like the courage and her sense of justice to get the job done no matter what she had to do.

Which character – as performed by Desiree Divine and Joel Leslie – was your favorite?

I liked Joel's Scottish brogue and British accent. This is a personal preference to me, I could listen to him all day long.

Seduced by a Highlander (or two)

I really liked the merging of the two ages in the this book. Ms. Scott did a great job of transporting me through time and into each of the characters' psyche. After each twist and turn I was found myself more engrossed in the story. It's funny what 300 years, love and a surprise destiny will do to a person's plans. Tarah Scott, Desiree Divine and Joel Leslie are a top notch team. I will be looking for more works from all of them.

A great listen and well written story that kept me hooked. The narrators were excellent and really brought the story to life. I don’t usually listen to books in this category, but will be looking for more from this author in the future.

* I was given a free copy of the book from AudiobookBlast dot com in exchange for a fair and honest review.

i loved this book. i listened to it all the way through nonstop. i will definitely find more books by this author.

This was a wonderful story! It is filled with twists and turns. The tale will have you believing you are right there with them.

I loved this book! It was so much fun with lots of twists and turns. The characters just come to life with the narration and this book is extremely steamy and HOT! Lots of sex!

Would you listen to Seduced again? Why?

Yes, I think I will listen again. I like the ending. I love the Voodoo aspect of the story, It is written well and wow what a lot of SEX. Nice! I was not expecting the sex. I really must read or listen to more of Tarah Scott's books.

Margot was my favorite. I think her sassy talk was fun.

Have you listened to any of Desiree Divine and Joel Leslie ’s other performances before? How does this one compare?

I have never listened to either of these performers before. I like the fact that there is a man doing the male voices. Joel was very good. I really had a hard time with Desiree in the first few chapters. She was reading TOO fast. It was very hard to keep up. She did slow down after several chapters. I am glad I kept listening. Her Southern Drawl became fun to listen to while dealing with the men.

I love it when Margot beats the daylights out of Cat. I frankly would have killed her....but Margot is too much of a Law officer to kill anyone.

This book had a VERY interesting twist at the end. I really love the way Tarah finished the loops. I will be ordering more of her books in the future.

This audiobook was provided by the author at no cost in exchange for an unbiased review courtesy of AudiobookBlast dot com.

We have Cat who inherited a castle in Scotland going there . She invited Margo . Her friend when they were friends down in the south US (Mississippi) . Once Margo steps into the Castle she has a funny Vibe. Cat has an idea to turn the Castle into a hotel. During Dinner with other guests Margo hears about a curse for the Twins brothers . They are stuck in between the 2 worlds . There is only one way to break it ... Grab it and see . Legend has it that one of the brothers is also a killer . Why is he a serial killer .
Margo suspects Cat of killing her husband who just happened to be Margo's cousin . Cat also is a reincarnation witch who does spells to feed the evil twin . Cat and the Twin are looking for the Knight Templars treasure. Body of ladies are disappearing. Margo needs to find some evidence before she is next . There are timetravel all round . What happens to the Twins and the witch

A woman investigates the murder of her best friend's husband. She falls in lust with two Scotsmen, one a centuries old killer the other a SAS agent. Though she doesn't believe that her ancient lover is real, it doesn't stop her from having sex with him. I felt that the narrator had a someone bothersome voice which grated on my ears slightly. I got this book in exchange for a review.