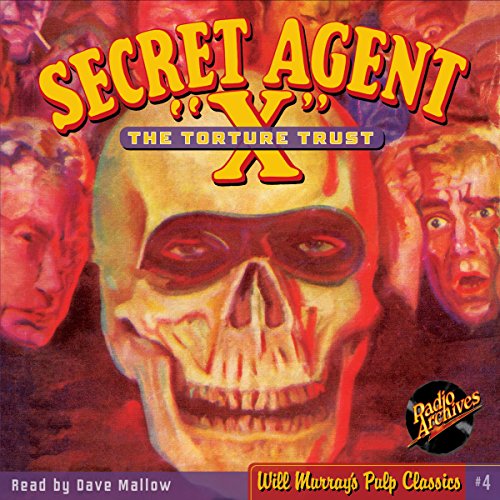 By: Brant House,RadioArchives.com
Narrated by: Dave Mallow
Try for $0.00

Editor Rose Wyn, with top writer Paul Chadwick, brainstormed and created Secret Agent X, an uncanny composite of Doc and The Shadow, with a dash of the Phantom thrown in. The first issue appeared at the end of 1933 with a February 1934 cover date.

A nameless mystery man with a wartime past in the Intelligence service who was declared dead by the Department of Justice and backed by a shadowy group of powerful philanthropists, Secret Agent X took on the toughest assignments of the dirty thirties. Operating out of the half-haunted Montgomery Mansion, X was also known as the Man of a Thousand Faces. A past master of disguise, he infiltrated the underworld to crush crime in all of its hideous manifestations.

What listeners say about Secret Agent X “The Torture Trust”