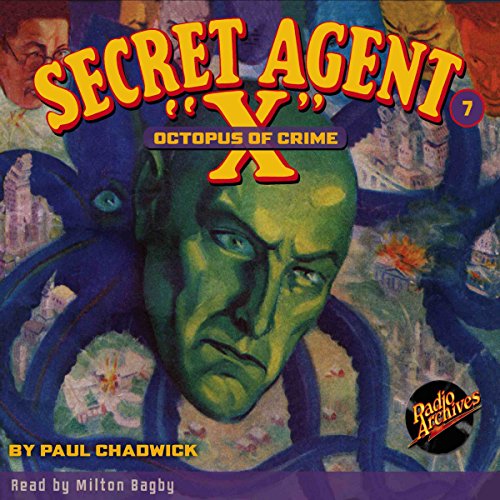 His true face unknown, his identity forever buried in a secret government file, Secret Agent "X" came back from the dead to take on the sinister sadists, and evil extortionists, who prey on innocent Americans. A master of disguise who carries a non-lethal gas gun, "X" the unknown is backed by a cabal of wealthy citizens, and is answerable only to the shadowy K-9 in Washington.

Tentacles of terror reached over the country, spreading like a hideous blight through the cities of America. The Underworld, welded together under the secret symbol of a monster of crime, was organized as never before. And Secret Agent "X," master man-hunter, went up against a genius of crime, who stooped even to the ghastly horrors of medieval torture.

The enigma of enigmas, Secret Agent "X" has been deputized by a high government official to battle the darkest, most diabolical enemies of America, before they sink their poisonous fangs into the nation's healthy core. Faceless and unsung, "X" infiltrates these threats in a bewildering array of disguises.

Writer Paul Chadwick communicated the essence of the series with the horrific titles of his novels. Chadwick specialized in telling melodramatic mystery yarns, saturated in an atmosphere of impending doom. The pulp editors called these menace stories. Eventually, these thrillers evolved into sub-genre known as weird menace. In Secret Agent "X", a cloud of diabolical danger hangs over the heads of every innocent character, until "X", using his fists, his gas gun, or his loyal operatives, shatters the threat for all time.

No one knew who Secret Agent "X" really was. Not his readers. Not his editors. Not even his writer, conceivably. To this day in the 21st Century, his true identity is still a deep mystery. That's keeping a secret!

Follow the Man of a Thousand Faces, as he confronts the menace of Octopus of Crime, ripped from the pages of Secret Agent "X" magazine, September 1934 and read with chilling intensity, by Milton Bagby.