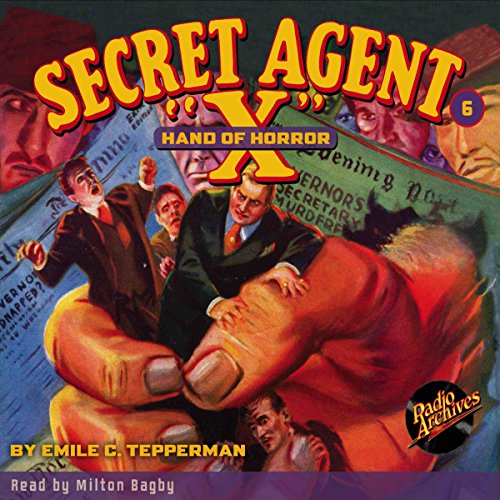 A nameless mystery man with a wartime past, backed by a shadowy group of powerful philanthropists, Secret Agent "X" took on the toughest assignments of the dirty thirties. Operating out of the half-haunted Montgomery Mansion, "X" was also known as the Man of a Thousand Faces. A past master of disguise, he infiltrated the Underworld to crush crime in all of its hideous manifestations.

A metropolis writhed in the clutch of horror's hand. The mightiest of the mighty fled in stark terror before its groping fiendish fingers. And its wake was a trail of macabre milestones, marking the way with bloated dead. One man alone, unaided, followed in that awesome wake. He was that enigma of enigmas - the Man of a Thousand Faces - Secret Agent "X."

The enigma of enigmas, Secret Agent "X" has been deputized by a high government official to battle the darkest, most diabolical enemies of America, before they sink their poisonous fangs into the nation's healthy core. Faceless and unsung, "X" infiltrates these threats in a bewildering array of disguises.

Every hero needed something to distinguish himself from his rivals. The Shadow could blend into the shadows. Doc Savage was a superman. The Spider shot first, and asked no questions later. Every one of them was a consummate quick-change artist. In that respect, "X" would be no different.

For Secret Agent "X", editor Rose Wyn decided to pit him against villains who were maestros of unbridled horror. Melodrama was the rule of the day. But Secret Agent "X" plunged into maelstroms of raw bloodlust undreamed of by The Shadow. His foes were truly depraved. Terrorists. Torturers. Extortionists. Kidnappers. Stranglers. Fiends. Arsonists. These were the types of torn-from-the-tabloids master criminals "X" hunted. It was grim fare.

Follow the Man of a Thousand Faces as he confronts the menace of Hand of Horror, ripped from the pages of Secret Agent "X" magazine, August 1934 and read with chilling intensity by Milton Bagby.