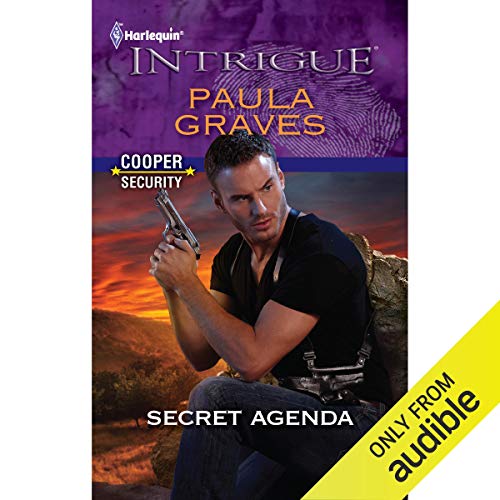 By: Paula Graves
Narrated by: Gwen Hughes
Length: 6 hrs and 31 mins
Categories: Romance, Suspense
4 out of 5 stars 4.2 (11 ratings)
This title is included in Audible Escape

He'd faced down danger multiple times, but now Pentagon liaison Evan Pike had to deal with the ultimate confrontation. Telling Megan Randall that her late husband had been murdered by his own government was difficult. Keeping their association strictly about business, however, was proving impossible. Especially once Megan's life was put in jeopardy.

On the run with a stranger, Megan wondered how her quiet life had changed so drastically. Having Evan as her protector was comforting and she knew he'd do anything to keep her alive. But he was also a man who had her questioning her belief that she'd never love again. And that was even more dangerous….

I would recommend the book to read. The author writes very naturally and knowledgeably about the military and paramilitary investigation. She also writes a terrific love/sex story. She is consistently excellent. I was looking forward to listening to the book come alive in a different way, read by someone with different inflections, and interpretations.

I would NOT recommend the audio book. The narrator is obviously a smoker, and is very phlegmy with her voices. She also has a very strident way of talking, and when she makes a point in the story she s l o w s d o w n. I can make my own interpretation of major points thank you.

She also makes everyone from the south sound like a red neck hillbilly with no teeth and no education. I believe that some of these high up Delta force types probably are not total hicks from the Tennessee Mountains.

I went back several times to try to give the story/narrator more time to grow on me. Couldn't do it - way too irritating. Even Kathleen Turner with her smoker/whiskey voice can make it soft and sublte, with inflections that are pleasing to the ear. Shades of grey - not the black and white rock hard voice of this reader. I will be watching to avoid further books narrated by her. Whereas I pick up books on purpose, narrated by the outstanding Victor Slezak, Patrick Lawlor, Phil Gigante, Dennis Boutsakaris, Angela Dawes, Frank Muller - even if I don't know the Author.