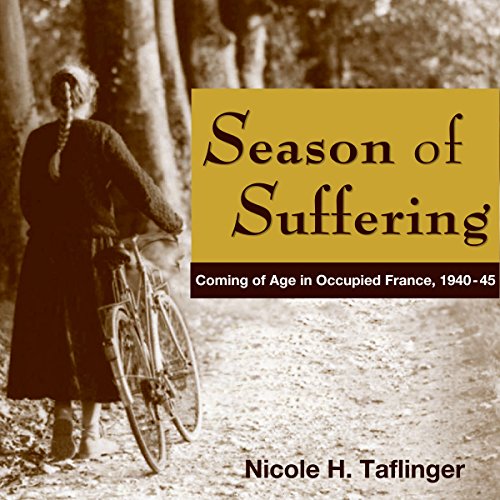 By: Nicole H Taflinger
Narrated by: Sally Martin
Try for $0.00

Born in 1927, Nicole Braux's earliest recollections occur in the French city of Nancy, where her father owned and operated a hotel and restaurant. Her charming reflections paint a picture of a romantic culture still wounded by the First World War. Nicole was 12 when her father was recalled into the reserves in 1939. Within months, she watched German troops invade. "We peeked above the window sill and saw them...Our imaginations hadn't exaggerated; they looked as evil, it not more so, than we'd expected!" Little by little, the Braux family adjusted to life under occupation. They experienced recurrent air raid alerts, Nazi propaganda, rationing, the Black Market, and bombings. As they struggled simply to acquire food and keep warm, thinking of the future became irrelevant. Teachers, friends, employers, priests, nuns, and doctors disappeared in the night. Relationships became veiled in worry, suspicion, and secrecy. French citizens quietly resisted. They concocted strategies to elude curfew. Women dressed to offend Germans, donning short skirts and makeup, and choosing the bright colors of the French flag. They sold tainted food to the despised oppressors. As the fighting drew ever closer, desperation and terror increased, but miraculous events brought hope. Finally the inconceivable joy of liberation came. However, food remained scarce, the fate of her father was still unknown, and now 18, Nicole found herself deeply in love with Lieutenant Ancel G. Taflinger, pilot for General George S. Patton. Written decades ago but never published, the author's guileless voice enhances her adolescent memories of the German occupation - an existence of fear, loss, suffering, and fierce hatred - and illustrates the immense emotional toll of war.

What listeners say about Season of Suffering

This book is a recommended read for someone who is interested in life under Nazi Occupation. It tells you about day to day existence, collaborators who are not really, about the French resistance and the struggles of day to day existence with food shortages and rationing. Yet wanting to be a normal teenager.

What other book might you compare Season of Suffering to and why?

It is a good contrast with Diary of Anne Frank. You can see the differences between being in an occupied country as a Gentile vs being Jewish. This book tells you about life outside the attic.

I love narrators who can just become part of the background and present the story and this was done perfectly in this book.

This book is a little long for one session, but I did it comfortably in 2 solid chunks.

the narrator recounts the author's story in a sing song voice that is suited to telling a story to pre-schoolers. it's a shame because the story has much value. It should have been read by the author herself or someone with French intonation.

a journey back in time

If you could sum up Season of Suffering in three words, what would they be?

war as seen by "normal" people

What was one of the most memorable moments of Season of Suffering?

the love story is delicate and subtle. so needed these time

What does Sally Martin bring to the story that you wouldn’t experience if you just read the book?

my father grew up in that area exactly in these Epoque. Although he died a year ago the book help me to bring back his memories.
We are Jews living in Israel now. Most of the stories I hear are from the Jewish point of view. It's interesting for me to hear the same stories from the Catholic girl perspective

Couldn't Get Through It. Bored to Tears...

Story: Couldn't finish it, it was just too damn boring. I was looking for a little slice of life from a non-soldier perspective but not that small a piece. Literally, "I liked this boy down the way" stuff. Just everyday, ordinary stuff. There might have been something interesting in there somewhere but no way was I sacrificing another 3 hours of my life that I will never get back.

Overall: If you dig rural farm girls in a non-pornographic setting, then maybe this is for you? But probably not...


This audio book was provided by the author, narrator, or publisher at no cost in exchange for an unbiased review.

What did you love best about Season of Suffering?

The story in which way it was told and what we can attain from that troubled time. Narration and sequence of events which took place were compelling and kept me interested.

A moving memoir about life in WWII France.

This book is a moving memoir of Nicole Beaux Taflinder. Nicole grew up during WWII in occupied France. This is an incredibly interesting and moving story of that time. A carefree childhood that was over at 13 years of age. She describes her life and that of family and friends, neighbors and other locals in such detail that you can picture everything she writes. Beautifully written by a woman that survived and triumphed. Nicole Helene Taflinder 1927 - 2016. This audiobook was recieved via Audiobook Boom, at no cost in exchange for an unbiased review.

Although well written this was a bit slow for me. Just didn't hold my interest.

The narrator gave a good performance.

All of them. I truly adored this audiobook from start to end.

Yes, I really want to, but I don't have enough time for that. This book is 7 hours long. Sally Martin is a good narrator, makes this book even better in audio than paper. I would certainly recommend this audiobook to a friend.

This followed a teenage girl living in Nancy, France during the Second World War. It was quite interesting to see the War from a different perspective, that of the female view, but also that of day to day life. France during the Second World War is kind of a black hole with history, as it was under the control of Germany and the "puppet Vichy government". I find it quite remarkable that the people of Nancy were able to continue their every day life as if the war wasn't going on.

"My father was not a good businessman ..."

As the Second World War sinks into the realms of ancient history , with very few now left who endured both it and the immediate aftermath, accounts like this one become ever more important. The military side of the action is well documented, not so much the experiences of the civilians who had to continue their daily lives as if nothing much had changed, whilst in reality, all that which was past and constant was gone forever.

These recollections of a young French girl, entering the the occupation days in her early teens, is especially poignant: old enough to remember how it was before the Germans came but still open to life's complexities and with a youthful hope for the future, her memories are clear and very moving and sometimes surprising. It cannot tell more than a tiny slice of what it was like to be caught up in the awfulness of wartime Europe. Everyone will have had different experiences, different stories to tell. But it is one piece in that huge jigsaw which can pass down through generations an awareness that the dry military facts can never give. Told with a simple naivety, I especially enjoyed her recollections of her childhood, the almost unchanging quality of that time sandwiched between World Wars One and Two, a time which was surely lost forever.
The narrator, Sally Martin, is the perfect voice for the girl, reading with a clear, innocent voice in perfect synchronicity with the text, bringing her to life in a way that reading the written word might fail to do. The whole book is atmospheric, well written and moving.

I was fortunate in being gifted a copy of Season of Suffering by the rights holder, via Audiobook Boom. My thanks for that. I have read extensively about this traumatic period of the 20th century, having been born during the war, and have heard many stories, both from relatives and others, as well as in books, of what it was like to be living in England through it all. Everyone remembers different things. So good to have the first hand experiences of a young woman's memories of her life in France to add to the overall picture.
A recommended read to everyone who is in anyway interested in people, wherever and whenever they might be.