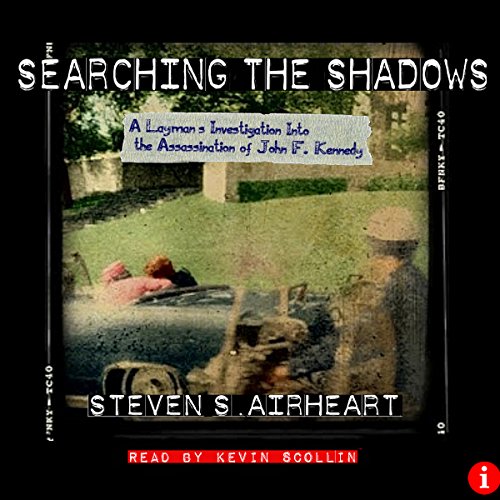 A Layman's Investigation Into the Assassination of John F. Kennedy
By: Steven S. Airheart
Narrated by: Kevin Scollin
Length: 9 hrs and 31 mins
Categories: History, 20th Century
4 out of 5 stars 4.2 (9 ratings)

As the 50th anniversary of the murder of John F. Kennedy approaches, it seems as if opinions or who committed the crime are as divided as ever. Instead of a much hoped for consensus as to who might have been responsible for America's greatest unsolved mystery, no clear and near unanimous verdict has come forth. Although the general public continues to support a conspiracy in the shooting, solid group of researchers and notable members of the main broadcast media in America pounce on every opportunity to quell any attempt to find Lee Harvey Oswald not guilty.

Those who believe that the case against Oswald was weak have steadfastly held to the feeling that no new evidence has come forth to seal his fate once and for all. In fact, if anything the case against Oswald has continued to crumble bit by bit over time. Although the case against him is mostly circumstantial, television networks like National Geographic, Discovery, and History Channel have produced documentaries which allow little room for questioning Oswald's guilt.So what is fact? What is fiction? Searching the Shadows - Steve Airheart's presentation about the assassination of John F. Kennedy - is a straightforward, factual, insightful, objective and exciting compendium of the myriad facts and red herrings in the case. Mr. Airheart discusses major theories about JFK's death and all the while gives the reader little-known facts, thought-provoking comments, and other curios which lead into the labyrinth of gangsters and government. Searching the Shadows is a factual and logical investigation that is easily understood.

Originally published in print in 1993 and 2000, this eBook debut contains a brand new chapter from the author that details the most recent developments in the JFK murder case.

Great book for the JFK Assassination. But there are numerous pronunciation issues, such as Bethesda Naval Hospital being pronounced as Bethseda.

An interesting title, yet is clearly a 'pro conspiracy' book. We all know artistic licence is used in many books, and films, but this takes it a stage further. Nothing new in it, no great revelations, it's exactly the same as the 1000 or so other books written about the assassination. What I found most appalling is the clear lack of any objective research, states rumours (that time and time again have been disproved), and puts this forward as historical fact. Example: 'Earl Warren himself sealed the records of the Warren report', it's historical fact the '75 year rule', was in force years before the assassination even took place. He claims Oswald was set up yet does not explain exactly how and by whom. The sad thing is, people believe publications such as this.