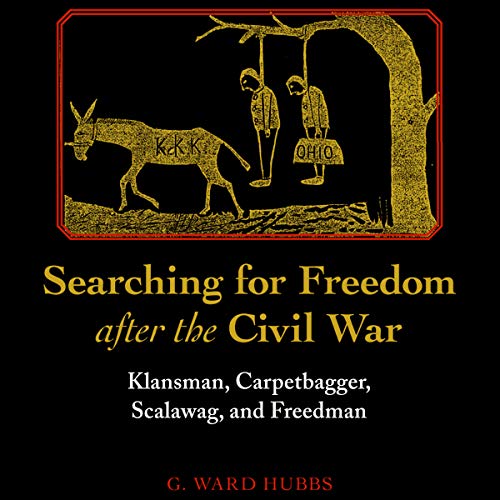 Searching for Freedom After the Civil War

In Searching for Freedom After the Civil War: Klansman, Carpetbagger, Scalawag, and Freedman, G. Ward Hubbs uses a stark and iconic political cartoon to illuminate postwar conflicts over the meaning of freedom in the American South.

The cartoon first appeared in the Tuskaloosa Independent Monitor, published by local Ku Klux Klan boss Ryland Randolph, as a swaggering threat aimed at three individuals. Hanged from an oak branch clutching a carpetbag marked “OHIO” is the Reverend Arad S. Lakin, the Northern-born incoming president of the University of Alabama. Swinging from another noose is Dr. Noah B. Cloud - agricultural reformer, superintendent of education, and deemed by Randolph a “scalawag” for joining Alabama’s reformed state government. The accompanying caption, penned in purple prose, similarly threatens Shandy Jones, a politically active local man of color. Using a dynamic and unprecedented approach that interprets the same events through four points of view, Hubbs artfully unpacks numerous layers of meaning behind this brutal two-dimensional image.

The four men associated with the cartoon - Randolph, Lakin, Cloud, and Jones - were archetypes of those who were seeking to rebuild a South shattered by war. Their lives, but especially their four very different understandings of freedom, help to explain many of the conflicts of the 1860s.

General listeners of this highly accessible volume will discover fascinating new insights about life during and after America’s greatest crisis.

"Well-written and thoroughly researched. Its ambitious dissection of the manifold concept of freedom is illuminating and rewarding." (The Alabama Review)

What listeners say about Searching for Freedom After the Civil War