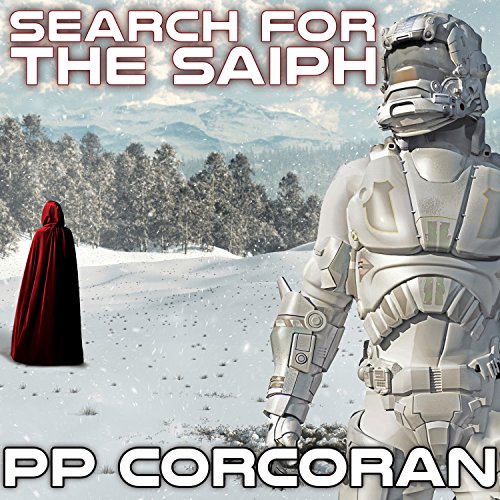 Search for the Saiph

The Commonwealth Union of Planets begin their mission to the Saiph Worlds. To seek out their genetic cousins cited in the alien database, to unravel the secrets of their enemy and exploit any weakness. The "others" capture The Happy Wanderer and her precious navigation system. The Union's future flounders, as they're fatally exposed to a catastrophic betrayal at the hands of the Alonian Empire.

The highly decorated Admiral John Radford begins to turn the tide. He leads the Commonwealth Fleet in a hard-fought, bloody battle. Along the road to this costly victory, Radford finds it - the key to winning the war. Can he stop the unthinkable? Can he stop the others from striking at the heart of humanity?

What listeners say about Search for the Saiph

I was lost most of the book as to who was who. Struggled to finish it.
I would not recommend it.

This is a great story for military science fiction fans. For some the military history part may not have that much interest. But, generally the story moves along well and it is an exciting story and well told. I liked the narrator, easy to listen to and understand. Try it, you'll like it.

A little too far out there

Like the first book this one too is full of impossible unbelievable science. An example without a spoiler, every world's atmosphere seems to be oxygen based in the exact same proportions as earth, a big deal is made about five fingers with opposing thumb....really a single genetic intervention millions of years ago and that's what we see? Some one must have talked to the author because this book at least has more races of humans in leadership but the entire show is still run by earth as we are THE SMARTEST AND BRAVEST. Also EVERYONE (except the few villains) gets along like one big humanoid family same moral standards out for the betterment of the universe....PLEASE
Having said all that, or despite all that, the story is still kind of intriguing and keeps your interest. Not sad that I listened just not sure I can take another one.

I enjoyed this very much. Well written and very well read! I recommend this for any space war fan.

Would you consider the audio edition of Search for the Saiph to be better than the print version?

What was one of the most memorable moments of Search for the Saiph?

Have you listened to any of Eric Michael Summerer’s other performances before? How does this one compare?

nope good listen about average with others

looking forward to the next one

A little bit out of the ordinary

I thought this story was a little bit out of the ordinary which is what I like. There is lots of action, lots of high tech ships and weapons. And an unusual lot of Aliens that aren't that Alien.
Brad....

The story is not as predictable to lesser minds. If you ever YouTube space battle scenes, then this book is for you. The formula used keeps the listener peeked. Just enough back ground on the development of various societies and technology to lend credence to the real meat of the book. I like that the author gives humanity and other sentient life a nobler then though core values. The only thing I didn't like was that it ended.