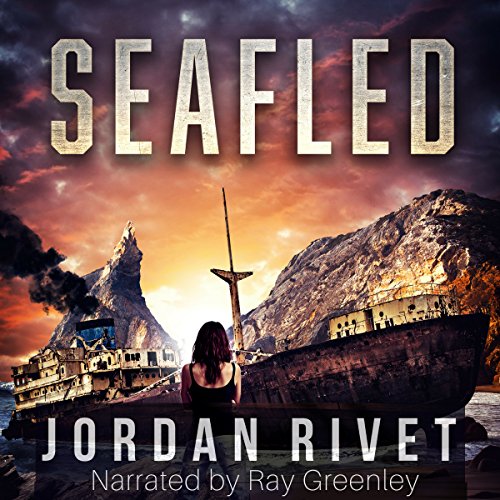 By: Jordan Rivet
Narrated by: Ray Greenley
Try for $0.00

Esther's seabound world has changed. Her revolutionary energy technology allows ships to sail long distances and has ended the Catalina's isolation policy. With the changes come new responsibilities for Esther - and new dangers for the people she loves.

After a shocking revelation from a reclusive colony on land, Esther must embark on one final rescue mission. Old enemies surface on the voyage, but Esther won't anticipate her biggest threat. She might not like the answers she finds on the ravaged coast.

Land is waiting. Can she survive it?

Listen to the epic conclusion to the Seabound Chronicles!

What listeners say about Seafled

The Seabound Chronicles is an excellent post-apocalyptic series that takes place about 17 years after a massive eruption at Yellowstone. Those who managed to survive the eruption and ash fled to the oceans. The last of humanity was surviving at sea, or so they thought. They later learn that there are survivors on land. In book 3 Neil starts gathering names of survivors from each of the land settlements he is able to communicate with. One settlement in particular had a familiar name. Thinking it may be Esther's sister, they set off to find out. They encounter new dangers as well as some old ones.

Excellent performance by Ray Greenley! He definitely brings life to this awesome series!

If you enjoy post-apocalyptic books,. you will love this series! I would recommend starting with book 1 first.

I am looking forward to the prequel book for this series, Burnt Sea. I have no doubt it will be just as good. We will find out how this all started.

A good conclusion to the series

At the end of this novel, I felt the series had come to full circle and it had answered most of the questions that were left open in the previous novels. Then, again, it also felt like it was only the beginning and a spin-off series could be done, this time with the stories of the people who survived in the land.

I always enjoy the Seabound stories.Their enginuity and resourcefullness are neverending.In this book they finally venture to land.They find other survivors,some good,some bad.Ray Greenley is the perfect narrator for this book.
I was given this book by the narrator,author or publisher free for an honest review.

out of the sea and onto land

Seafled is the third novel in the trilogy called The Seabound Chronicles by Jordan Rivet. Esther, a ship’s mechanic, and David, a new ship’s captain, live in a world where extreme climate events have forced people to live on the sea in a variety of vessels like ships and barges. Through re-development of communications technology, it has become clear that clusters of people have survived on land as well as at sea. Excited by the news, David puts his plans to travel to land into high gear. And people begin the search for their loved ones through this communications network. When shocking news arrives from a reclusive colony on land, Esther convinces the crew heading to land to switch their travel plans and head to this colony. However, the closer they get, they begin to realize that the people on land might have all the same kinds of inter-colony challenges that they have encountered at sea.

Seafled brings our cast of characters out of the sea and onto land, changing the scope of the story dramatically. However, regardless of the change in setting, this story is just as fast-paced and action-filled as the previous two novels. It actually changes and expands the challenges that Esther, David, and their crew face. Also, adding the politics of the people living on land and the different kinds of challenges they have encountered adds another layer to this world. Again, there were a lot of new characters, but for the most part, it wasn’t too difficult to keep track of them, perhaps because their experiences were so different from the sea-bound characters. In addition to the action and suspense, it was great to observe the clashes between the two groups that had been living such a different life for so long. It was a little odd that it wasn’t completely obvious how nature had negatively affected the land-bound people just that they had lost their infrastructure. There was also a small glimpse into how people had become nomadic immediately after the disaster, which was interesting to learn about. The story wraps up neatly without leaving any obvious loose ends, bringing our protagonist, Esther, finally to a, at least seemingly, calm place.

The narration by Ray Greenly was as well done as before, with unique voicing and characterization for the different characters. The production quality was good. I would recommend this novel to anyone who likes unique action-adventure post-apocalyptic stories

Yes, I'd recommend it, especially if they have read the previous books in this trilogy. It's a great conclusion that wraps up all the major plot points and loose ends.

What other book might you compare Seafled to and why?

Some of the aspects are similar to other post-apocalyptic young adult series like Divergent or Maze Runner where a significant portion of the population has died and the remaining groups of people are often in small, tight-knit but paranoid communities.

Which character – as performed by Ray Greenley – was your favorite?

It's a toss-up between Esther and David, and especially the romantic tension that exists between them throughout this last book especially.

I enjoyed the climactic confrontation at the end and how the story ended after that, but to say more than that would be giving huge spoilers.

I know everyone doesn't feel this way, but I always enjoy it when a book closes tidily and happily, and this was that sort of ending to the series. I'm walking away satisfied and would like to check out the prequel to this trilogy.

In a sea of never ending series and saga's, Jordan Rivet's Seabound Chronicles had one of the better endings to a series that I've read in a long time. The fact that there was an ending is really rare anymore, and I think that Rivet wrote it perfectly. It was open-ended enough that you could continue the story in your head, but gave enough closure to give a person who read all three books that final bit of, well, closure.

Seafled picks up right where Seaswept left off. We are still following the crew of Esther and the Catalina, except now they are about to set course for something they never thought they would see again (in more than one way).

The entire Seabound Chronicles series reminded me a lot of the movie Waterworld (and don't get me wrong, I love that movie). The endless search for fuel, dry land, and a safe harbor. I've read a lot of post-apocalyptic books that cover a lot of different topics, but this was the first series that covered what would you do if you were already out to see when an apocalyptic event happened. That fact alone made this series enjoyable.

Seafled had the same fast pacing and enjoyable dialogue as the first two books, and I thought that it might be my favorite book in the series.

Overall, Seafled was a wonderful conclusion to this series and to Esther's tales at sea. I will definitely check out the prequel that should be out on audio this year to see how it all started.

I was given a free copy of Seafled, this has not affected my review in any way.

Enjoy this review? Please vote for it! If you'd like to see more reviews like this, please check out BriansBookBlog DOT com.

Esther and David are planning a trip to land to take a look around and see if its time to move back there.

Out of the blue Esther gets news that her sister who she thought dead for 17 years is alive and living on a lake with some god fearing people what could be wrong..

May we always uphold the code.

16 years after the original apocalyptic volcanic,eruption, and free now to travel wherever they want, a group from the Catalina cruise ship decide to form an expedition to visit the land community with whom they have recently made contact. They had been delighted to learn of other smatterings of land survivor groups also. Esther had been unsure whether or not to go even though David was leading the group. But when she hears that her sister might be a survivor, she and her father also join the adventure into the unknown - on land.

Again read by the excellent Mr.Greenley, whose pleasant voice carries the story forward with nice pacing and individual character conversation, this is a good follow on from the previous Seabound Chronical books, 1 and 2.