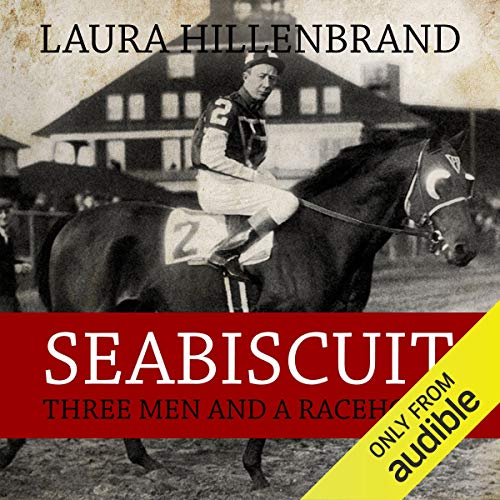 By: Laura Hillenbrand
Narrated by: George Newbern
Try for $0.00

Winner of the William Hill Sports Book of the Year Award and the basis of a major film adaptation, Seabiscuit is the true story of three men and their dreams for one racehorse. A story that symbolises a pivotal moment in US history, as modern America was born out of the crucible of the Depression and the new century’s greatest nation found the courage to bet on itself to win against the odds.

In 1936, the habits of 19th-century America were finally consigned to history just as Margaret Mitchell’s Gone with the Wind was published. In their place, modern America was born. Nothing defined this new era more than the story of Seabiscuit, a stunted colt with asymmetrical knees that had for two years been hacked around no-good race tracks which led to permanent leg damage. Yet by 1937, Seabiscuit could draw crowds of 60,000 and had more newspaper column inches devoted to him than Mussolini, Hitler or Roosevelt. America had gone to the races for the first time since the Depression and fallen in love with a misshapen colt of great character. Now it wanted a winner.

Seabiscuit is also the story of three men: Tom Smith, a former Wild West Showman was the trainer; Red Pollard, abandoned by his poverty stricken family at a race track became the rider; and Charles Howard, a pioneer car manufacturer in San Francisco in the 1920s was the owner and financier. These three combined to create the legend of Seabiscuit and epitomise a dream for the emerging new America.

Laura Hillenbrand is a contributing writer/editor to Equus magazine, among many other journals. Her article on Seabiscuit won the Eclipse Award for Magazine Writing; she served as a consultant on the Universal film of this book, released in 2003. She lives in Washington DC.

"A rip-roaring narrative from a cobwebbed chapter of the Depression." (Sunday Times)
"Hillenbrand tells the story of the triumphs and tribulations of her cast of misfits with flair and skill, relishing the larger than life characters who inhabited this forgotten demimonde." (Sunday Times)
"Most readable...a wonderful tale." (Daily Mail)

What listeners say about Seabiscuit

This is a great story of coincidences and triumph over adversity
It is a story that needed to be told and has been told so well in this audio, i was awake all night listening to it and will do again.

I really enjoyed the way all the main characters came together,each of them broken on some level and each of their lives changed by fate, this whole story could not have happened without each of them playing a fundamental role in each other lives.

Brilliant in a word !

After watching the film I had to read the book and wasn't disappointed. What an inspiring story.

Thoroughly enjoyed the narration and was totally absorbed by the story. Really hard to put down!

Hugely moving
Captivating from the first furlong
A book that has created positive memories that will last a lifetime
The people’s horse and the key people in his life is an overwhelming story which warms the heart and the narration is spot on
The author must be enormously proud of the wonderful biography
I almost feel like listening to it all over again even after only finishing it 10 minutes ago.

This story was well written with so much detail you could be actually there and narrated, brilliant.

You'll Be Cheering Him On

The detail about life for jockeys in the 1930s.