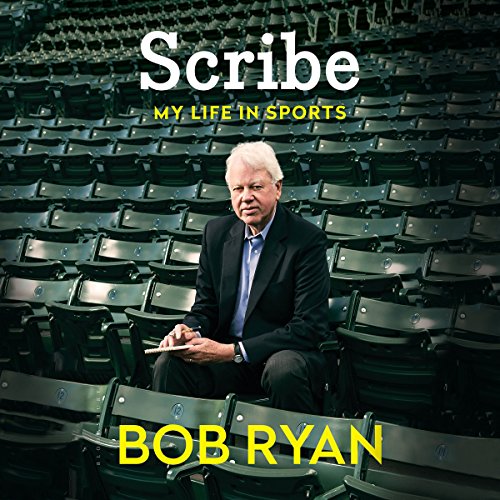 Ever since he joined the sports department of the Boston Globe in 1968, sports enthusiasts have been blessed with the writing and reporting of Bob Ryan. Tony Kornheiser calls him the "quintessential American sportswriter". For the past 25 years, he has also been a regular on various ESPN shows, especially The Sports Reporters, spreading his knowledge and enthusiasm for sports of all kinds. Born in 1946 in Trenton, New Jersey, Ryan cut his teeth going with his father to the Polo Grounds and Connie Mack Stadium, and to college basketball games at the Palestra in Philadelphia when it was the epicenter of the college game. As a young man, he became sports editor of his high school paper - and at age 23, a year into his Boston Globe experience, he was handed the Boston Celtics beat as the Bill Russell era ended and the Dave Cowens one began. His all-star career was launched. Ever since, his insight as a reporter and skills as a writer have been matched by an ability to connect with people - players, management, the reading public - probably because, at heart, he has always been as much a fan as a reporter. More than anything, Scribe reveals the people behind the stories, as only Bob Ryan can, from the NBA to 11 Olympics to his surprising favorite sport to cover - golf - and much more. It is sure to be one of the most talked about sports books of 2014, by one of the sports world’s most admired journalists.

"This is clearly a book in which the narration is perfect for the subject. It's so genuinely animated that all true sports fans--not just those who root for Boston--will enjoy it." ( AudioFile)

What listeners say about Scribe

No my idea of a memoir

It is too bad that Mr. Ryan wants to just rehash Celtic and Bruin seasons with mere statements of scores, assists and other statistics without much insight. It might be better to hear about his life, his techniques, his meetings with remarkable people. His chapters on Red Auerbach and the Olympics were the best, but a memoir of his era of the Red Sox without a single mention of Roger Clemens or his impact on the city of Boston is curious. Mr. Ryan reads very well, but one just wishes he had more to say. His acknowledgments alone take up about 10 minutes and mean nothing. One likes the guy, but his memoir is a disappointment.

I enjoyed Bob Ryan's reflections on his life in sports. This book consists mostly of portraits of people in sports, and I enjoyed it thoroughly. Many but not all the profiles are of sports figures from Boston. I'm a Boston guy and probably liked it a lot for that reason. I think that any fan of Boston sports would enjoy this a lot, and even other serious sports fans would like it as well. The Celtics along with general NBA and Olympic basketball take up a good part of the book. There is a lot of baseball and football, too, and even some hockey and golf. This is a little autobiographical, too, of his life as a sports writer. Overall - a good sports book.

many many great stories ~ thanks bob :)

this is great & ay better hearing the stories right from bob ryan ~ many many great stories ~ thanks bob :)

Bob Ryan is not merely a regional, but a National treasure. What a great, engaging book!

What a great companion!

You have to be of a certain age...and it helps to be from Boston, but a fabulous story told nonetheless.

What was one of the most memorable moments of Scribe?

The simply Ryanesque ways he would veer off on a story... With a personal passion.

It was just "Bob"....talking about his life in sports. Open, honest... Almost melancholy.

Great story from a great writer! Bob Ryan is the man! His stories are unparrelled

A "must-read" for ALL sports fans

I have always been a fan of Bob Ryan. I have followed his writing ever since I can remember and I have been able to share the same airspace with him on more than one occasion. Hearing his life story told how only Mr. Ryan himself could tell was a joy and a privilege. I learned so much from hearing the book and got a few chuckles out of some of the stories as well. Thank you Mr. Ryan.

Great for all sports lovers

Engaging and told with passion! Loved it! Lots of personality and wit. Energetic and lots of stuff behind the scenes.

I'm a Celtics fan so I enjoyed those parts the most. Bob Ryan narrating his own audible book was different. Not terrible though. Solid listen.

Bob Ryan gives the game story of his life

I knew I would love this book, since I enjoy Ryan's writing and his energetic TV work. The behind-the-scenes stories from the 70's and 80's Celtics are priceless.