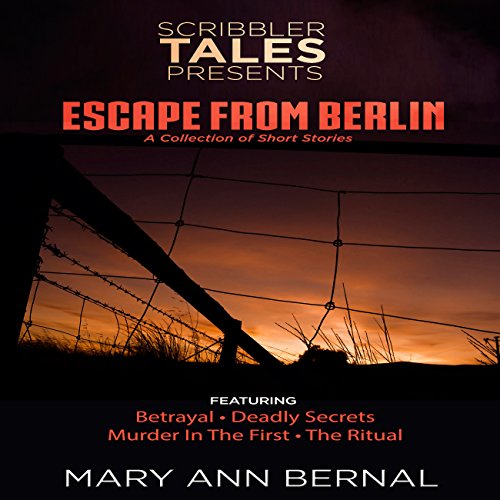 By: Mary Ann Bernal
Narrated by: Jack Nolan
Try for $0.00

Mark Dresdner's cover is blown, forcing him to flee East Germany, yet he refuses to leave the woman he loves. Finding the border crossing blocked, and the enemy closing in, will he evade capture or be forced to make the ultimate sacrifice?

"Betrayal": Aelia gives herself completely to the man she loves, revealing a life-threatening secret, trusting her husband unconditionally, but is he deserving of her trust?

"Deadly Secrets": Lysandra seeks a new life in America, hoping to forget her past, but an accidental meeting with a man who knows her true identity endangers her happiness.

"Murder in the First": As judge, jury, and executioner, Bethel decides the fate of the man responsible for her plight, but things go terribly wrong and the predator becomes the prey.

"The Ritual": Devona's initiation into a modern-day pagan sect on All Hallows' Eve sends the terrified young woman fleeing for her life amidst a raging storm. Escaping the sacrificial altar, will she survive the tempest?

What listeners say about Scribbler Tales Presents: Escape from Berlin