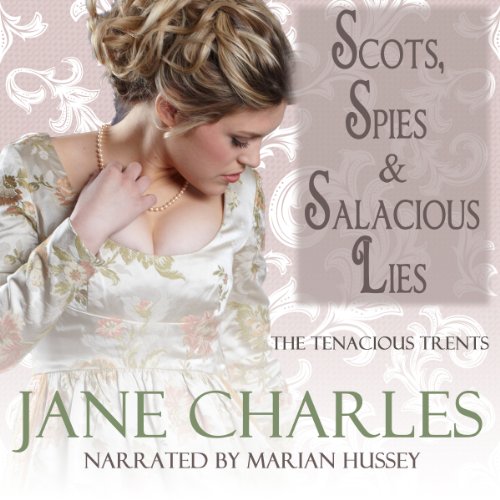 By: Jane Charles
Narrated by: Marian Hussey
Try for $0.00

Scots, Spies and Salacious Lies is a compilation of three Regency Novellas. The first, "Compromised at Christmas" was the beginning of the Tenacious Trents Series.

Miss Elizabeth Whitton craved excitement and adventure. Unwilling to endure one boring season after another, she convinces her uncle in the Home Office to let her work for him. John Phillip Trent has been spying for the Home Office in the stables of Tuileries as Jean Pierre Bouvier for more than two years, his only English contact - Lisette Renard a servant girl inside the palace. When a summons from the Duke of Danby slips through the proper channels, both Elizabeth and John's covers are compromised. To escape the palace and France with their lives, they'll have to depend on each other and the miracle of Christmas. ("Compromised at Christmas" was original published in A Summons from His Grace and is the first story in the Tenacious Trents Series.)

Heiress Lady Moira Kirkwood will do anything it takes to marry a laird to take her north - far, far away from London and her domineering mother. Unfortunately, a pair of gentlemen overhear her jest about Scotland and compromising a fellow if she has to. Before the sun has risen the next day, Moira's name and a scandalous wager have found themselves inside the infamous betting book at White's.

One penniless gentleman after another begs Gideon Baxter, Viscount Ainsely, for his assistance in wooing Lady Moira. Unfortunately, Gideon would like to woo the charming lady himself. If only she cared more for him than for the location of his estate, he'd could be assured of where her true feelings lie. ("Landing a Laird" was originally published in The Betting Season)

Devlin Bartlett was never meant to be Viscount Marston, yet he has inherited not only the title but three younger sisters, all of marriageable ages. He soon learns that thwarting the French was much easier than playing guardian to three young ladies, and decides the simplest solution is to marry them off.

Louisa Whitton needs to find a husband of her own choosing before Christmas. At her sister's house party, she meets the perfect gentleman - thus foiling her grandfather's plans. However, Marston refuses to even think about courting her until his sisters are wed, and he has the audacity to ask her to wait. Louisa's grandfather will never agree, so she sets out to find the perfect substitute for Marston, forcing him to choose between his sisters' future and his own. ("Devil in My Dreams" was originally published in A Season to Remember).

I'm really not one for novellas but my daughter suggested it and we usually like the same books.
For such a short spy story the first one was very good. I really liked Jean Pierre/John Trent and Elizabeth/Lisette and their love story. I liked the grandfather, Danby.
The sex was nice too.

I liked the second story. I could see why Moira wanted to live in Scotland. Wow, what a horrible mother she had. Gideon was a terrific hero. There was no sex in this one but that was ok.

Sweet story about Elizabeth's sister (book 1) Louisa. I liked her and Marston. It was a nice love story and, again, there was no sex. So, if you're a "book without sex" reader you could just zip past the sex in story 1 and you could enjoy this book too.

As to the narrator: She must have been great because I never found a thing to criticize about her reading during the entire book. So, yes, I would definitely listen to her again.
She was that good..

I don't usually ever read novellas but I really liked this narrator and took a chance. I am happy I did. These 3 novellas were fun to read. They were short and to the point quickly. No fillers. A very nicely written sex scene in the first story and sensual attraction in the second two stories. There was lots of dialogue throughout all three stories. This is my first Jane Charles read and I really like her writing style.
I would definitely read more of her books.

I have to point out that the Narration was just fantastic! 10 stars!! I could listen to Marian Hussey narrate every historical romance novel. She does a great job on giving everyone a distinctive voice and a fabulous job on the men's voices.