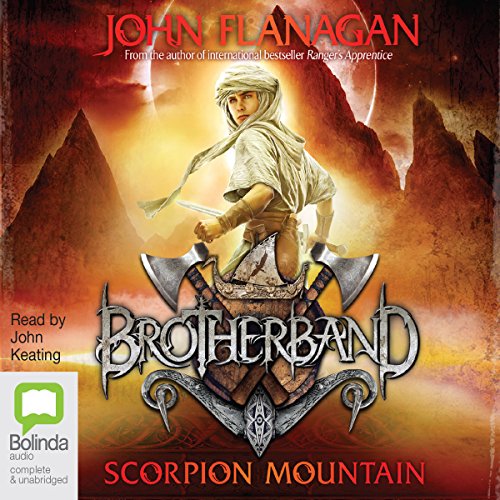 By: John Flanagan
Narrated by: John Keating
Try for $0.00

When the worlds of Ranger's Apprentice and Brotherband cross over, action and adventure are guaranteed!King Duncan of Araluen has an urgent mission for Hal and the Heron brotherband.

One assassination attempt on his daughter Cassandra was foiled – but the would-be killers are from the deadly Scorpion cult, and they won't be satisfied until they have completed their task.

The Herons team up with Ranger Gilan to track the killers across the deserts of Arrida and infiltrate their mountain lair. But the Scorpion assassins are not the only threat the brotherband will face.

A seaside battle is looming, and the Herons are called upon to help an old friend of Araluen in his fight. With their forces split between searing land and treacherous seas, can the brotherband complete their mission – before the killers find their royal target?

Why oh why has Gilans accent changed??? So distracting, I still love the story though.

As always wonderfully written and performed by both Johns' a .little overly repetitive with respect to the identity confusion between the twins possibly because the same descriptive text used. But overall wonderful and relaxing for all ages.

I am not one of the target readership for this book

I am a 68 year old retired GP who loved to read the Viking books by Henry Treece as a child.
I find john be Flanagan’s books gripping exciting and well written. I love the strong character of the girl Lydia and of course the one handed Thorn. I can’t wait to hear the superbly read next book.

Title says it all, love all the books of this Author and Narrator. Give these books a chance!!! You won't regret it!

Scsndians and Rangers together again! what more could a Brotherband fan want? Nothing, just another book of satisfaction guaranteed!

I loved it, the inventive mind of the skirl is amazing. I'm looking forward to the next one.

Another humourous tale of the heron brother and. Really enjoyed this and especially the bits that make you cringe or whince

John Keating is NOT a good reader.

If I hear him say PAR TIC U LAR LEE and Booie one more time I will just scream. My husband heard him a short while a d said, “ how can you put up with THAT?” If I didn’t like John Flanagan’s writing so much I wouldn’t put up with him.

Scorpion Mountain is a great new adventure in The Brotherband Chronicles by John Flanagan. This time they are on a mission for King Duncan of Araluen. Joined by Ranger Gilan, Hal and his crew sail for the shores of Arrida to confront Iqbal and the corsairs that have hired the cult assassin group to kill Princess Cassandra after another failed assassination attempt. John Keating delivers a good performance of this book. The Brotherband Chronicles just keeps getting better with this latest instalment in the series.