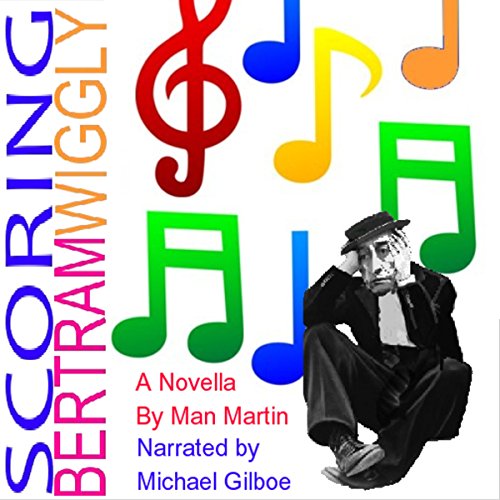 When Bertram Wiggly leaves his job as an appliance actuary - calculating the life expectancy of major appliances so their warranties expire precisely one day before they implode - he thinks he's found the perfect place to retire in Medville, with its town square, circled by brick-cobbled streets and quaint shops with bright red and white awnings. But then the town rezones itself for musicals. At any moment an invisible orchestra is apt to strike up a melody and the otherwise sane townsfolk of Medville burst into song. And not just song, either. Dance. Against his will, Bertram finds himself in the midst of a musical comedy in which he has been cast as the comic curmudgeon. Can Bertram defy Sam, the mysterious orchestra leader, and thwart the destiny laid out for him?

Definitely. Lovers of musicals and/or absurd comedies will love it.

What other book might you compare Scoring Bertram Wiggly to and why?

I honestly cannot think of a book to compare it to! It's so unique, and it works best as an audiobook. Being the only character in a musical who questions being in a musical is a hilarious premise.

I love when he walks down the street and can't avoid the orchestral accompaniment.

Michael Gilboe is a terrific narrator, especially for this absurdist story.

This was a wonderful read!I was awed by Michael Bilboes narration and that he could keep up with the story! Bertram Wiggley is a sweet man,keeps to himself most of the time.He is informed that he has an 'inheritance' which turns out to be a 'Niece' who moves in with him.He LOVES her,then he decides to marry her,without her consent he develops this plan all along our story.Mr Wiggley is appalled one day that the local school hires a band,to play out every whim of the town and everyone is to sing.The intrigue,confusion,etc caused by this is hilarious! Mr Wiggleys luck is not good,give it a go to see what happens!
While I liked this book,I thought there were gaps that would have fleshed out the story.Mike Venditti did a great job narrating this story.

struggled with this one for sure .not my kind of book I guess .to much going on so .

Which character – as performed by Michael Gilboe – was your favorite?

The portrayal of the smart-aleck conductor Sam.

A great listen for anyone familiar with watching or even acting in classic musicals.