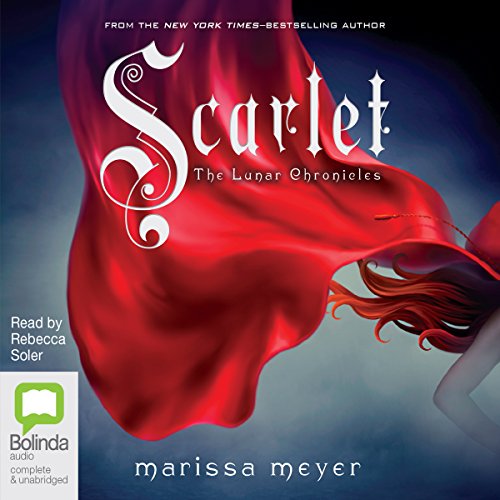 By: Marissa Meyer
Narrated by: Rebecca Soler
Try for $0.00

The second thrilling audiobook in the best-selling Lunar Chronicles series by Marissa Meyer.

Scarlet Benoit's grandmother is missing. The police have closed her case. The only person Scarlet can turn to is Wolf, a street fighter she does not trust, but they are drawn to each other.

Meanwhile, in New Beijing, Cinder will become the Commonwealth's most wanted fugitive - when she breaks out of prison to stay one step ahead of vicious Queen Levana.

As Scarlet and Wolf expose one mystery, they encounter Cinder, and a new one unravels. Together they must challenge the evil queen, who will stop at nothing to make Prince Kai her husband, her king, her prisoner....

This is not the fairy tale you remember. But it's one you won't forget.

"It's another Marissa Meyer roller coaster ride, part science fiction/fantasy, part political machination with a hint of romance.... With at least one more Lunar Chronicle to come, the suspense continues. And which fairy tale will Meyer morph next?" ( Booklist)
"Returning fans of Meyer's Cinder will gladly sink their teeth into this ambitious, wholly satisfying sequel." ( Publishers Weekly)

What listeners say about Scarlet

This is the 2nd book in this series and so much more exciting than the last book. The story continues with Cinder and then introduces Scarlet. The story gradually unfolds and you discover why these girls are connected. I need to read the next book to see what happens. This is a great read.

I enjoyed d the twists in this. I struggled a bit with the switching perspectives. I did not want to leave Cinder but Scarlet grew on me and so did Wolf. I found the love a bit shallow again but I get the feeling that that's going to be a theme of this series. I did love the Scarlet storyline overall, I found this had some good reveals that I should've seen coming on reflection. In hindsight some were a little obvious but this was very enjoyable! On to book three!

Hooked from book one Cinder, can't get enough of the Lunar Chronicles series. Starting book three

After I devoured Cinder I jumped straight into Scarlet. I am a sucker for retellings and this series does it so well. Marissa puts her own twist on these much-loved classic stories. These are not your damsels in distress let me tell you. These girls are kicking ass and fighting for themselves.

This book introduces a new character, Scarlet (aka Red Riding Hood). Scarlet lives with her Grandmother who has been missing for almost 2 weeks. We follow Scarlet as she tries to track her down. Scarlet is not afraid to speak her mind, even when it gets her in trouble. She is feisty and not easily deterred.

We, of course, introduce Wolf but I'm not going to say much more about him except I love him.

The story is told from dual POV. We flick between Scarlet and Cinder. Cinder's story continues from the first book and slowly we see how these two characters stories collide.

I think I loved this just as much as the first one. The introduction of the new characters who have such strong voices from the off just helps to enrich this already exciting world.

I am a big fan of dystopian as well as fantasy and sci-fi but these genres can be overdone or done poorly. Marissa, however, does a fantastic job of making the world unique. It's well thought out and well built.

If you can't tell I loved this book and I cannot wait to jump into Cress.

I love this series, but Scarlett would be my least favourite. However, when relistenimh I found Scarleet and Wolve,s story had grown on me. I think that Rebecca Solar gives a great performance narrating this sequal. Also, it was great rereading the scenes that Cinder, Iko and Thorn appear in. P.s I give the narration 5 stars

Spent the whole day listening to this. Exciting and gripping, with some interesting twists and turns.

Great second book in the series. You do need to have listened to the first one. Again, great for people who are not so into Sci fi as it's not completely focused on it. Same narrator as first which is great so all the voices continue on

Good fun. Enjoyed the romp. Production could be better and more consistant. Ms Soler could do with deciding whether or not Scarlett has French accent; the swapping and changing was mildly irritating but did not detract from the story.

I brought the paperback of this but have been too busy to read. This audio book was perfect

Good but not for all

This has a really good base. The characters and story seam interesting. I just can't get past the writing style. Unfortunately this one is not for me. I gave ut until book 2.

loved every second of it

love this story, can not wait for the next book. great adaptation of the Cinderella theme

Good sorry, I loved the parts that returned to Cinder. it has some well done parallels to the original fable. If you like YA fantasy, you'll like this book.

Amazing author!
Incredible story!
Enticing narration!
DEFINITELY worth checking out the entire series!! This is one of the best!!

loved the story, i really enjoyed the fairytail meets scifi and the fun sassy female characters

easy to listen to narrator but did found it weird that scarlett only got her fence accident at the end of the story once cinder got to france and scarlet found her g'ma
also sometimes the voices that were used for character spilled out into the storytelling/actions particularly towards the end. but still enjoyable

I fell like the first was better this was still good and I finished it in one day but kinda boring... maybe that's not the righty word... there wasn't as much of cinder tho I liked scarlet and wolf but it took longer to get used to them and I wasn't feeling the emotions as much as I'm the first... but still really good exited about the third (thank goodness I got a credit today)