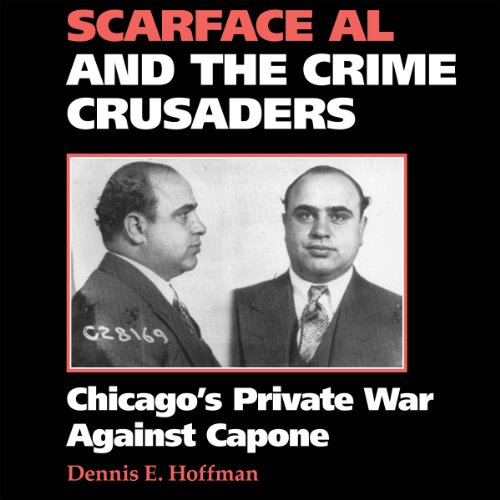 According to the Elliot Ness myth, which has been widely disseminated through books, television shows, and movies, Ness and the Untouchables defeated Al Capone by marshaling superior firepower. In Scarface Al and the Crime Crusaders, Dennis Hoffman presents a fresh new perspective on the downfall of Al Capone. To debunk the Eliot Ness myth, he shows how a handful of private citizens brought Capone to justice by outsmarting him rather than by outgunning him.

Drawing on previously untapped sources, Hoffman dissects what he terms a "private war" against Capone. He traces the behind-the-scenes work of a few prominent Chicago businessmen from their successful lobbying of presidents Coolidge and Hoover on behalf of federal intervention to the trial, sentencing, and punishment of Al Capone. Hoffman also reconstructs in detail a number of privately sponsored citizen initiatives directed at stopping Capone. These private ventures included prosecuting the gangsters responsible for election crimes; establishing a crime lab to assist in gangbusting; underwriting the costs of the investigation of the Jake Lingle murder; stigmatizing Capone; and protecting the star witnesses for the prosecution in Al Capone's income tax evasion case.

Hoffman suggests that as American society continues to be threatened by illegal drugs, gangs, and widespread violence, it is important to remember that the organized crime and political corruption of Prohibition-era Chicago were checked through the efforts of private citizens.

The book is published by Southern Illinois University Press. Dennis E. Hoffman is an associate professor of criminal justice at the University of Nebraska at Omaha.

What listeners say about Scarface Al and the Crime Crusaders: Chicago's Private War Against Capone