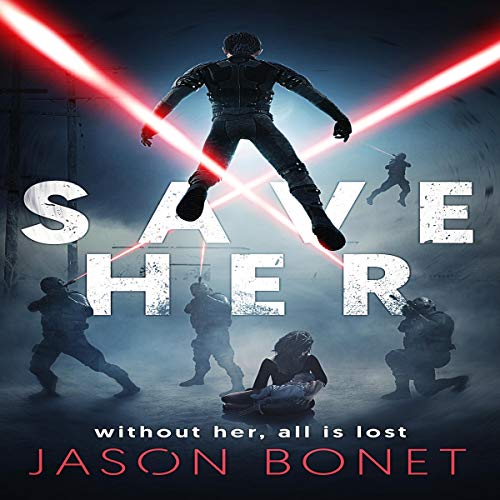 By: Jason Bonet
Narrated by: Kim Bretton
Try for $0.00

Natalie wakes bound to a chair. Fear envelopes her. Her captors must know she’s pregnant. Pregnant with Drayden’s baby. Pregnant with offspring that might have some of Drayden’s awesome nanotech powers. She has to escape. Drayden has to find her. They have to save their baby or the enemy will have all that they need to control everything and everyone.

What listeners say about Save Her

I have to think a bit on what I think of all that I have heard and consumed during this read. There was a lot here that was interesting and then a bit confusing. I loved the idea of Drayden and his abilities. I was on the fence about Natalie and why she did the things she did while being held captive. The by the intense ending I was thinking that maybe she was a lot smarter than I initial thought. This would most certainly be a more futuristic setting with the level of intelligence of the young characters. Narration for me was also on the fence. I am not sure if it was suppose to be this way by design or if it was an add on at a later time. I found the voice of the narrators to be helpful and a hindrance. I was not so sure of the third person and the first person back and forth. It had my mind all over the place. That was more writing than the narration. The duo was an added bonus. I received this audiobook as part of my participation in a blog tour with Audiobookworm Promotions. The tour is being sponsored by Jason Bonet. The gifting of this audiobook did not affect my opinion of it.

The last scene was dramatic, full of action, and explosive as Natalie and Drayden accomplished a worthwhile victory, together. She was a fierce mother, fighting for her baby, she knew what her enemy was capable of, yet took a stand, and fought her way to freedom. Kudos to Kim Breton for a fantastic narration for this portion of the book. Jason Bonet’s narration of Drayden’s point of view was splendid. He had a pleasant voice and his narration was evocative, immersive and engaging. Drayden’s point of view sounded like it was written to be read as an audiobook. The tone used for Drayden reflected his age, determination, youth brashness and his laser focus on his goals. Natalie’s point of view felt like it was forced into the storyline and it was reflected in the narration. Her entire storyline was about telling Drayden’s story, getting pregnant, food cravings, and pumping milk afterwards; it was hard to connect with her character. If Natalie was not part of the story, the story feels like it could still live on without her. Also, Natalie’s story was told in a third person perspective and it affected the feel of the performance, it sometimes sound awkward to have access to Natalie’s thoughts even though she was referenced in the third person. In addition, the friendly conversational tone Natalie had with her interrogator did not come across as realistic. She did not sound afraid, nervous, worried, or fearful for her life and her unborn child, as one would expect from a person in captivity. In one of the scenes, Natalie caught a glimpse of her best friend Liv captured through the two way interrogation mirror, the narration of her despair did not sound authentic enough to match Natalie’s emotional state. Natalie’s point of view’s performance was not very believable and less engaging. <i> I received this audiobook at no-cost from Audiobook Empire. The gifting of this audiobook did not affect my opinion of it. </I>

woah I did not see that coming!

started a little slow but once it got rolling it did not stop. defintely recommends. you wont regret it