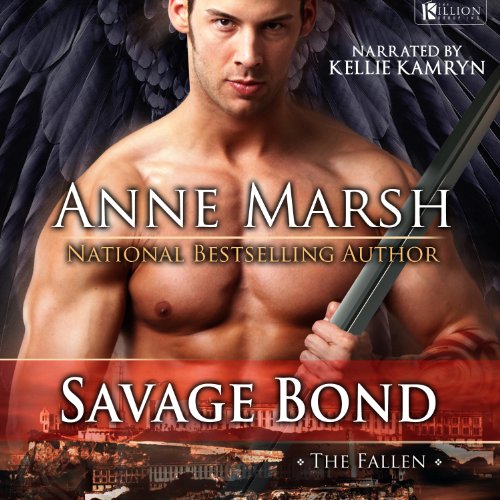 As a former Dominion warrior and Fallen angel, Vkhin knows how to fight. How to track his prey. And when to deal out death with brutal efficiency. Redemption isn't part of his plans-until he finds himself chasing Ria Morgan through a wasteland. Now, he's hunting for the woman who could restore both his lost wings-and his soul.

Ria Morgan was just doing her job, shooting recon photos of a secret Fallen prison. When her chopper goes down, however, she figures her days are numbered. Until the dark angel hunting her offers her a temptingly seductive deal: bond with him and he'll keep her safe. Safety's tempting-but Vkhin is even more so. Now, Ria will have to choose between long-held loyalties and the wickedly sensual pleasure of Vkhin's touch.

What listeners say about Savage Bond

Am sorry but I have to give an honest review while the story was cute, there was no real depth or substance to the story. A child could have written a better plot 😴

Action and steam, but I wish I had more.

The action was good and the story was steamy. It was nice to see another fallen find their mate. The story did stray from the initial "rules" established in the last 2 books without explanation or acknowledgment. Maybe their was a possible exception for it, but as it stands, it almost invalidates the previous cannon. It's still enjoyable, but I wish I had more.
This novella also lost P.J.'s hot gruffy man voice from the last one as Kellie from the 1st is narrating this time. She isn't bad, I just really wanted to hear P.J. do it.
Overall I would still recommend this especially seeing how this most likely is the last one we will get. I'm sad, because this was a fresh idea that I would of liked to see continue.
Listened through Audible Escape.

I fell in love w/ him in the previous books & was so excited to listen to his story. I was therefore very disappointed to see it was only half the length of the 1st 2 books. What there was was good, but there was no time to reveal how they fell in love. One minute they were virtual strangers & the next, in love.