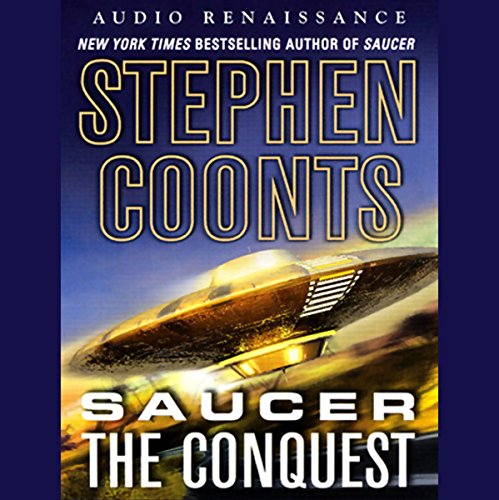 By: Stephen Coonts
Narrated by: Eric Conger
Try for $0.00

After discovering the secrets of a 140,000-year-old spacecraft in Saucer, Rip Cantrell and beautiful test pilot Charley Pine think their days of high-flying extraterrestrial adventure are over. But when Pine takes up flying spaceplanes to the moon for the French lunar base project, she discovers that the project director has installed a world-threatening antigravity beam.

The French kidnap Rip's Uncle Egg and force him to fly a saucer, hidden in Area 51, to the moon. Rip and Charley have no choice; to rescue Egg and save the world, they must steal the first saucer from its new home, the National Air and Space Museum, and hit the not-so-friendly skies again.

Stephen Coonts's first Saucer was a smash-hit nationwide. Now the unlikely duo of Rip Cantrell and Charley Pine are back, so strap in and leave your passports behind as the fight for freedom on the new frontier begins.

What listeners say about Saucer: The Conquest [Macmillan Audio]

I really enjoyed the book. Full of comments like "if we put sanctions on the French, then we must have a Wine for Food program" and "if Washington gets destroyed, we'll rebuild the capitol in Kansas - it's closer to Texas anyway".

Lots of likable good-guys and despicable bad guys spread out between Earth and the Moon.

Not only did I enjoy the audiobook, my son got hooked while listening for just half an hour. It will keep your attention. Can't wait for the next one in the series.

It is well written and well read. There were a few twists and turns that challenge the disbelieve scale, but not overly so.

It was a great way to pass several hundred miles on the road.

This was a great follow up book to the first one (which sadly I have a hard time finding). It is an entertaining and thought provoking of what if's. A research station on the moon, intrigue, world conquest. Great book and you won't want to turn it off!

First let me say the STORY was an excellent sequel to Coonts’ original Saucer novel. The narrator, however, was the absolute worst I have listened to. After the first couple hours, I put away the audible version with the intent of buying the book (paper) version so I could get through the story.
After not finding the time and letting a few months pass, I finally forced myself to bear the narrator’s monotonous, 4th grade level reading through the end. (Apparently this narrator never learned what punctuation is!) Anyway, my recommendation would be to buy the paper version for a great read. Unfortunately I would have to say stay away from the audible version.

Tolerable, but better than listening to the radio

I bought this book on a whim. I usually take my time choosing my next download, but this time I thought, "What the heck? I haven't listened to a sci-fi book in a while." Well, if I had listened to the sample, I would have kept browsing.

The narrator is talent-less. He has a good voice, but more often than not, he fails to add personality and emotion, or at least any that's interesting. In fact, he sounded as though he was reading stereo instructions.

The story is filled with cheap, predictable, and sometimes useless dialogue. The author loves to use the word "squirt" and used it quite often when an antimatter (or "antiproton", or "antipositron"; the author used them interchangeably) gun was used. I'm sorry, but the only kind of gun you squirt is a water gun. The same goes for "turning on the juice" when the saucer would accelerate; a phrase used so often that it stood out like a sore thumb. What is it with this author and his liquids? :)

And the technology? Aaarrgh! The saucers are sophisticated pieces of technology, able to go amazingly fast, and be driven by mind control, but they can't alert you when enemy aircraft or weaponry is coming your way? And what's more, if they use up fuel (water) so fast just going from the earth to the moon, including air combat scenes, how could they possibly carry the original owners (the aliens) from the farther reaches of space to earth? Perhaps that's why they crashed here in the first place.

And what one of the characters did at the end of the story to "hide" the saucer was just absurd. No explanation was offered at all. We're just supposed to take it as a common occurrence and say, "oh well, of course." There's more that boggles the mind, but I'm running out of space.

So why did I listen to it if I have all this to say about it? My comments are compressed here, so there are some interesting or somewhat entertaining moments that enabled me to tolerate it. Besides, it was better listening to it than the radio. ;)

It was good to pick up with characters from the previous story. New vilians with "questionable" motives enliven the plot. Charley and Rip definitly have their hands full. Enjoyable :))

the story was great. could seriously use a better narrator. ask the narrator from the first book to read this one.

Out of this World. This is a great book .Should be

loved it .should be longer overall well written and narration was well done .Good story

This was a great follow up book to the Coonts' first Saucer book...doesn't suffer from second hand syndrome. It is entertaining and thought provoking -- intrigue, world conquest and humor. Cartoonish characters with names like Senator Blohardt and Texas used car salesman turned space tourist Joe Bob Hooker add to the fun. Satirical comments like: "if we put sanctions on the French, then we must have a Wine for Food program" and "if Washington gets destroyed, we'll rebuild the capitol in Kansas - it's closer to Texas anyway" are roll on the floor kinda stuff. Readers with half a brain couldn't fail to recognize that it's all in fun. However, the Audible narrator is talent-less. He has a good voice, but personality and emotion are void. Yank and bank fighter pilot stuff with flying saucers was a fun listen. On the whole, despite stretching the laws of physics in a few places, the story is a good read.